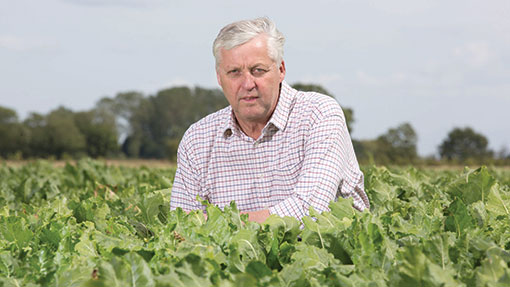 Defra secretary, Liz Truss, presented the top trophy to Mr Hovesen at the Farmers Weekly Awards Night, where more than 1,200 guests gathered to celebrate the achievements of 45 finalists and winners.

Poul manages more than 5,000ha of high-yielding crops in Norfolk and Poland for Salle Farms Company and Holkham Estate, with the guiding principals of building a sustainable farming strategy and using leading modern farming technology.

Poul managed farms in his home country of Denmark before moving to the UK in 1987 to take over the role of farms and estate manager at Salle Farms Company, just north of Norwich.

Since then, the estate has doubled in size to 2,000ha as well as acquired a further 900ha in Poland under his management. He is also farming director of 3,000ha of cropping at Holkham Estate, which is the home of the current Viscount Coke, ancestor of the great farming pioneer “Coke of Norfolk” and the Norfolk four-course rotation.

Poul’s name has become synonymous with high-yielding wheat crops in East Anglia, but he is also a highly respected farming champion for the environment, innovation and making farming a desirable career destination.

“Poul Hovesen is an inspiring leader for farming in so many ways. He’s developing his own young team to run every farming operation so that he can deliver the highest standards. His business insight, environment awareness and uptake of science are delivering a genuinely sustainable operation on a vast scale. His modest, but authoritative, character is influencing farming, and the wider industry, for the good of everyone”
The judges’ citation

He is attempting to develop a career structure in the businesses he manages as well as within the industry by working with his own team, other estate managers and colleges.

He probably employs the youngest farm workforce in the country. There are 16 estate staff in total at Salle Farms but five out of the eight farming staff are under the age of 30.

He works closely with nearby Easton and Otley Agricultural College to recruit and train young graduates: “Well-trained, competent and responsible operators are essential for me to carry out my role,” Poul says. “The ability to act quickly when conditions are right makes all the difference.”

Nothing is out of place at Manor farm (Salle Farms Company) when the judges visit. The yard is immaculate; even rows of wheat stand proud without any embarrassing weed heads in sight; busy staff sporting the Salle Farm emblem work industriously.

The results of his Scandinavian-born precision speak for themselves. Profits are almost 40% of turnover and output has doubled at Salle Farms in seven years. Average wheat yields have risen from a little over 9t/ha to nearly 11t/ha over the past 10 years. He has been in touching distance of achieving 13t wheat crops. Sugar beet yields have also risen, from 55t/ha to almost 80t/ha.

The top accolade of Farmer of the Year is selected from all the category winners by the following judging panel:

Crop performance at Holkham has been equally impressive, with winter and spring barley yields each up 3t since 2011.

Rotation is the key. At Salle Farms, winter wheat is followed by winter barley, oilseed rape, winter wheat, sugar beet, wheat or spring barley and finally spring beans to make up the seven-year cropping cycle. It has been tailor-made to improve soil structure, spread harvest workload (early-cut barley to late-lifted beet) and increase yields on this easily damaged light land.

“We need to stand back and think, and respect Mother Nature and the soil, as we need a sustained agriculture in a more open market,” he says.

The spread of crops to harvest has also helped to keep labour costs down. Seven full-time farm staff and just one combine cut nearly 2,000ha of combinable crops for Salle Farms.

Blackgrass has been virtually vanquished from the estate. Poul puts this down to using the plough, spring cropping – which enables better timing of cultivations – and drilling, as well as uniform seed-beds and judicial use of herbicides.

Benchmarking on yields, pesticides and fuels are just some of the critical parameters that help to inform his decision-making.

He receives strategic agronomy advice from Peter Riley (Prime Agriculture), winner of the 2009 Arable Adviser of the Year, and uses Gatekeeper software, as well as support from Agrovista, to keep tabs on new developments and operational decisions.

Poul is also working alongside scientists and the Environment Agency to cut levels of water pollution in the local River Wensum. This is part of a UK-wide project to improve water quality and the River Wensum was chosen, along with two other catchments, because it is one of most important chalk river habitats in the country.

The aim is to test on-farm measures to cut pollution while maintaining food production. Trials are taking place across 143ha of the estate with researchers from the University of East Anglia testing water from the farm drains.

Work using cover crops such as oilseed radish is under way to see how these overwintered crops can hold nutrients and potentially cut fertiliser requirements for subsequent crops, while a new spray store and spray filling gap, washing and storage area with outflow to a biobed ensures no pollution gets into watercourses.

Field margins have always played a part on the Salle Estate, whether in set-aside or not. More than 10% (240ha) of the estate is managed for wildlife, including 183ha of arable and permanent grassland in entry and higher level schemes.

Miles of hedgerow planting and amenity woodland means “there’s hardly a field at Salle Farms that doesn’t have a hedge,” Poul says.

Salle Farms has been in the ownership of the White family for more than 120 years; soils are predominantly light sandy loams with some boulder clay valleys.


The area of the estate is 2,016ha, which includes 90ha of Christmas trees and woodland, and 237ha of wildlife areas, set-aside and permanent pasture. Seven full-time farm staff, with five under the age of 30.


Holkham Estate is the home of the current Earl and Countess of Leicester, ancestors of Thomas Coke known as “Coke of Norfolk”, who pioneered modern farming and the Norfolk four-course rotation. Today, the arable operations total nearly 3,000ha and Coke’s principles still apply with a six-course rotation of potatoes, winter barley, oilseed rape, winter wheat, sugar beet and wheat or spring barley.