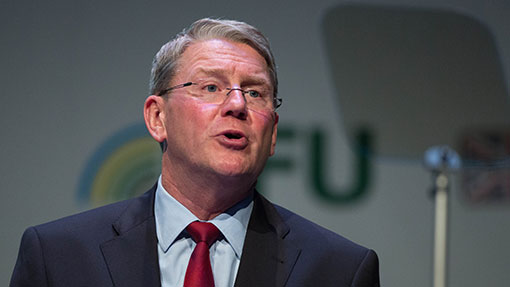 Peter Kendall will go down in history as one the greatest presidents the NFU has ever had.

This can-do Bedfordshire farmer took the helm in 2006 and over the following eight years – that’s four terms in NFU language – brought forensic intelligence and unrivalled passion to the job.

A moderniser with a clear, upbeat vision, he set about injecting positivity into the sector, positioning it as a vital part of the British economy – an approach he maintained even when the industry was experiencing difficult times. It is a strategy that paid off – public support for agriculture went up and British farming moved up the government’s agenda.

Whether confronting critical global issues such as CAP reform and climate change, or dealing with farmers’ individual preoccupations on a one-on-one basis, this Nottingham University agricultural economics graduate has championed farmers’ interests at all levels.

“Peter went beyond the  call of duty in his efforts to champion farmers and is a hugely deserving winner of  this award”
Jane King,  Editor, Farmers Weekly

It was not so long ago that food production was seen by some as an inconvenient by-product of environmental management, but Peter has helped, partly by his efforts to work more closely with other farming organisations, to push agricultural production up the political agenda.

He has also invested huge amounts of time promoting the sector to young people, who have responded to his knowledge and commitment.

He has been an articulate champion for farmers, equally confident on a big stage, in front of the media or in a one-to-one discussion.

Peter will go down in history as a very modern president – one who never lost touch with his farming roots, but understood how to effect change in the early 21st century.

“There has been no greater champion of farming than Peter,” says his successor, Meurig Raymond.

“It’s difficult to know where to start with his achievements, there are so many. I could say it was bringing together a coalition of organisations in ‘SOS Dairy’ to present a united industry in support of dairy farmers.

“I could say that it was his successful and tireless campaign on CAP to reduce modulation from the proposed 15%. I could also say it was his presidency that finally got the government to address the issue of TB in wildlife.

“It’s all of those things, but his biggest achievement, I believe, was leading the way in changing the perceptions of farming and creating an image of a vibrant, successful and positive industry.”

According to Meurig, Peter worked tirelessly to represent members – at all times of the day or night – and would frequently be on the phone at midnight and then again at 5am.

“Our members trusted Peter to stand up for their interests, something he did tirelessly at all levels for eight years.

“He is a passionate communicator, never losing enthusiasm or energy for promoting and representing farmers and farming.

“He has never been afraid to challenge anyone when he believes they are wrong; I think many government ministers over the years still have the bruises!

“But he was always fair and recognised the importance of being a united industry, even when people have different views. Peter is incredibly proud to be a farmer and I continue to be proud to have worked with him on all these important issues,” Meurig adds.

His super-human energy levels are a characteristic recognised by another former NFU president, Lord Henry Plumb. “Peter is the most energetic person I’ve ever known,” he says.

“The fact the membership of the NFU increased each year during his presidency proves his ability and communication skills. He was a good listener, but would make his views clear if he disagreed.

“His main gift was never running away from crisis or conflict and farmers should be proud of all the tremendous efforts he made on their behalf over his eight years in office.”

Jane King, Farmers Weekly editor, says: “Peter went beyond the call of duty in his efforts to champion farmers and is a hugely deserving winner of this award.

“Farmers across the country appreciated his commitment and dedication to fighting their corner and his legacy will be felt for many years.

“He and I didn’t always agree – at times my job involved writing critically about the NFU – but I admired Peter hugely and he was a real game-changer.”

Now Peter is embarking on new challenges, including his government-appointed role as chairman of the Agriculture and Horticulture Development Board.

And as for one of the first things he did when he stood down as president of the NFU in February? He got on his bike and did a 1,000-mile sponsored cycle ride to raise cash for farming charities.

“His biggest achievement was leading the  way in changing the perceptions of farming  and creating an image of a vibrant, successful  and positive industry”