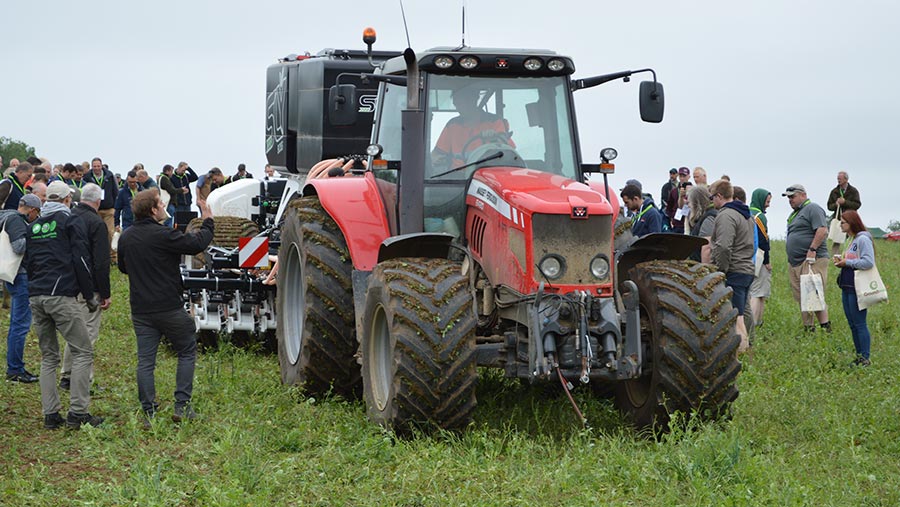 Groundswell, the regenerative agriculture event, was sold out over its two days as growers flocked to hear all the latest developments in sustainable farming and no-tillage techniques.

The event held at the family farm of brothers John and Paul Cherry in Hertfordshire, stopped selling tickets ahead of the farm demonstration on Wednesday and again today as the daily capacity of 1,850 tickets was reached on both days.

This is the event’s fourth year, and it was where growers heard two keynote overseas speakers heavily criticising current agricultural policies in developed economies.

He said a more holistic approach based on the biological sciences and better management was needed rather than relying on chemistry and big marketing budgets.

Farmers could be encouraged by lower taxes to plant more ground cover, limit water run-off and give more farm employment, he suggested, which received a ripple of applause from the largely farmer audience.

“The plough share and over-grazing are incredibly destructive to soils. What we need is multi-species pasture and cover cropping,” he said.

Mr Massy quoted US President Franklin Roosevelt in 1937 after he saw the effects of the 1930’s dust bowl in the mid-West saying, “A nation that destroys its soil, destroys itself”.

At the event, Harriet Cherry, daughter of Paul and in charge of media, said the two-day gathering had grown from 600 attendees in its first year which was for one-day in 2016.

“There is huge interest from farmers in taking control of their core assets – the soil – and making farming more resilient,” she said.