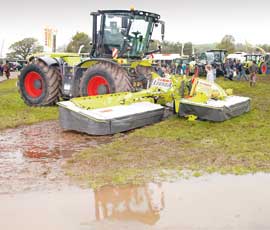 The fact that it rained on and off for most of the day at yesterday’s Grassland UK Event at Shepton Mallet, Somerset, probably didn’t surprise anyone, least of all the organisers. This has been the wettest Grassland Event (both in the run-up and on the day itself) that anyone can remember for 30 years.

With rain falling in large quantities throughout April and early May, the organisers took the decision to cancel the usual working demonstration last Thursday and move all the equipment to the hard standing on the Bath and West Showground next door. It was undoubtedly a good move, since the rain continued to fall through much of the day of the show itself.

Did it put off farmers and contractors from coming to the event? Of course not. Numbers were down by 25%, (6000 compared to 8000 in 2009), but it was still a busy show, with the biggest array of grass machinery anywhere in the UK this year. There was plenty of new kit that hadn’t been seen in the UK before, lots of business was done, machines discussed and pasties munched.

See our roundup of new machinery.