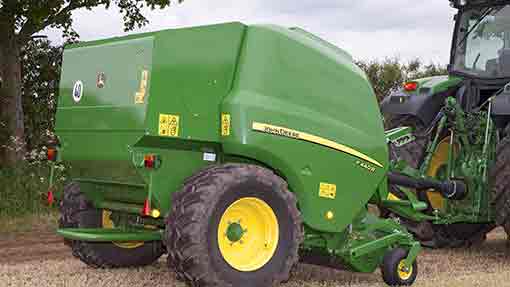 Though the pick-up and rotor were officially launched in Berlin in August 2013, the Grassland & Muck show is the first chance UK farmers have seen Deere’s F440M and F440R balers in action.

The main changes are in the feeding system, with both models getting the pick-up and rotor from the 900 series variable-chamber baler. A new five-tine bar and cam track design gives more consistent feeding, says Deere’s Ian Clarke, and full bearings are fitted rather than the hard plastic bushes.

The rotor design with inline rotor and conveying augers is also said to give more capacity. A cartridge greasing system is now fitted, along with the 1100 display unit from the company’s sprayer and baler.