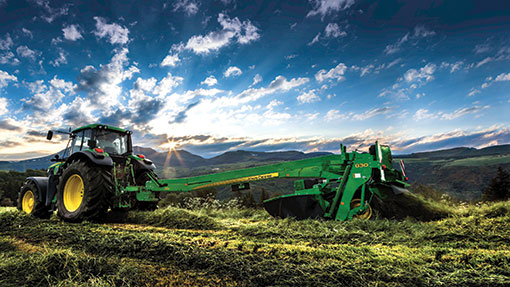 Wider working mowers with more effective suspension; a bigger choice of plain mowers focused on output; and big grass rakes that are easier to transport.

These are just some of the new grassland machines destined to be seen in action for the first time at Grassland & Muck 2014 – the national grassland demonstration staged by the Royal Agricultural Society of England at Stoneleigh Park on May 21-22.

Add into the mix new forage wagons and forage harvesters – including a “monster trailed chopper” as the manufacturer describes it for farmers and smaller contractors – and the event is shaping up as a top shop window for the latest in grass-harvesting machinery. 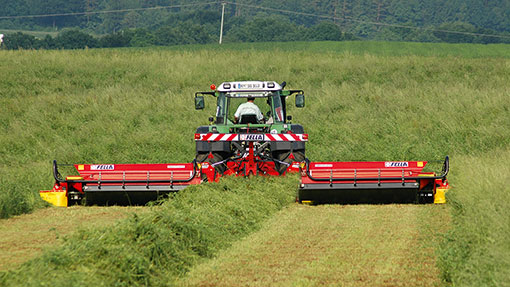 With a working width of 9.3m and a compact transport width of 2.78m, the Fella SM991 TL KC butterfly rear mower-conditioner partners a front-mounted mowco to fell silage grass at high outputs.

Both mowing units are centre-pivot mounted with hydro-pneumatic Turbolift suspension helping them adapt to ground contours while protecting the sward from skid damage. Combined with the Fella mower bed profile it also helps produce a grass swath as free from contamination as possible.

A safety swing anti-collision mechanism allows the mowers to swing backwards and upwards and all cutting discs have their own Drive Guard device for low-level impacts.

The 830 centre-pivot mower-conditioner being demonstrated is available in 3m and 3.5m working widths with a hood designed to maintain optimum spacing between the impeller tine or adjustable rubber roller conditioning units.

The modular cutterbar has been designed for high-speed mowing and the machine is said to be engineered to duplicate the load conditions of a self-propelled machine, with a balanced design, high ground clearance and new suspension adding to the machine’s credentials.

The 3.85m GXS 4005 mower is designed to float on the field surface thanks on a suspension system said to be unique. The Vari Float mechanism is part of an arm assembly that carries the 4m mowing deck at its centre for consistent performance over an inconsistent field surface for minimal soil contamination.

Power to the cutter bar is transmitted through the first disc and distributed to the others by large dimensioned gear wheels, with guide shoes integrated with the stone guards protecting each assembly and the plant crown to encourage rapid re-growth.

A hydraulic ram that positioned the deck behind the tractor for transport also provides impact swing-back protection. Undoing six nuts gives servicing access and only half a dozen fixings need to be removed to detach the disc drive modules from the cutterbar.

No extra hydraulic outlets are needed for the suspension system and with a weight of only 700kg the low power requirement means it can be used on tractors from 60hp. 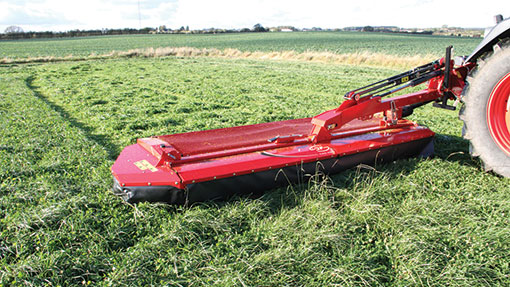 The 5095M is an all-new plain triple mower using 3.6m individual decks to fell 9.5m of grass with every bout and deliver a performance lift over the 8.7m model already in service.

Said to be suitable for tractors with just 150hp, it features a low-weight, high-strength butterfly construction tipping the scales at 1,500kg, with mowing units centrally suspended using a spring mechanism designed to generate even weight distribution for fast adaptation to ground contours while reducing skid wear and protecting grass stubbles. 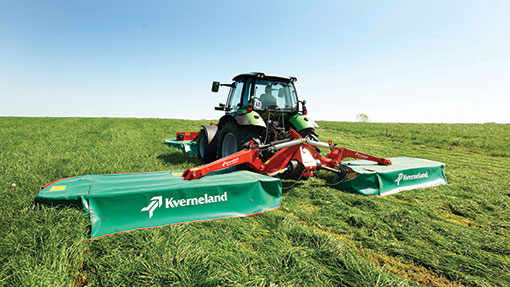 A new line of mounted mowers at the core of the Pottinger grass-equipment range includes the Novacat S12 combination with 11.2m of working width making it the widest triple available. Yet the outfit can be operated with tractors from 160hp, says the manufacturer.

All Novacat mounted mowers can be specified as a plain disc machine or with a choice of conditioning – the Extra Dry steel tine system or rollers for more delicate leafy crops. The latest models also have a 115deg vertical transport position for added stability when travelling at high speed. 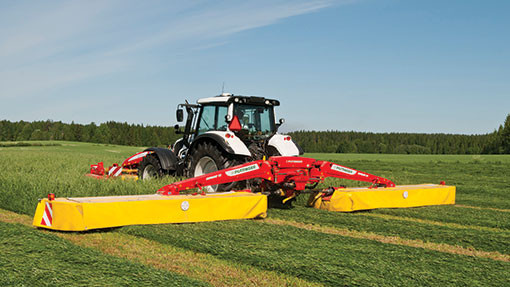 The four-rotor implement can cover 12.5m and has an oversized central frame for strength, stability and a compact, low transport configuration.

Each rotor runs on an undercarriage with gimbal-like cardanic suspension to provide effective contour matching for the clean-sweeping tines. 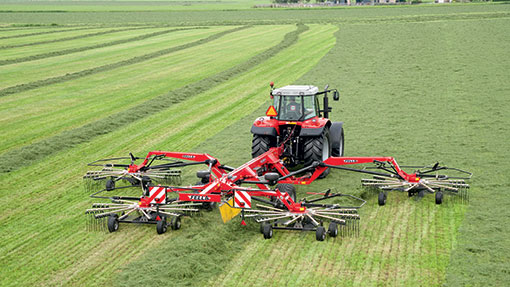 The GA Gyrorake series of semi-mounted twin rotor grass rakes is being extended by two larger newcomers that stretch working widths from 5.5m to 9.3m.

In addition to the patented Masterdrive two-stage reduction gearbox, the GA 8713 and GA 9513 have double curved tine arms mounted tangentially on the rotor head to optimise raking performance.

Three-dimensional rotor articulation and the bogie axle six-wheel undercarriage for each rotor is designed to keep the tines at the correct height over undulating ground when working at high speeds, and windrow width can be adjusted from 1.4m to 2.3m to match the pick-up dimensions of the largest balers and forage harvesters. 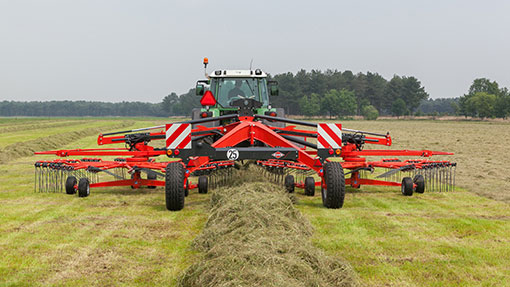 An all-new range of HIT grass tedders is promised with new rotor and patented tine arms designed to rapidly release grass at the end of the sweep when spreading to avoid crop bunching.

The Dynatech rotors are available in multiples of eight, 10 and 12 to provide different capacities.

Pottinger’s TOP C twin rotor rakes are also new from the ground up. Main feature of the TOP Tech Plus rotors is the facility to replace damaged tine arms in minutes. 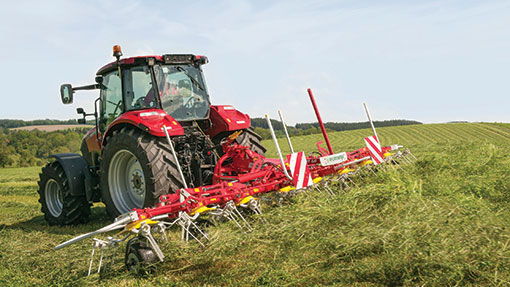 Improved transport mobility is promised by the Vicon Andex 904C Hydro twin rotor rake, which has a revised cam track design to produce a more uniform swath from 1.2m to 2.2m wide, and is equipped with the maintenance-free ProLine gearbox.

Hydraulic adjustment of working width from 8m to 9m caters for different crop yields. But it also means the rotors are easily set to the narrowest position for transport. With a new axle design that can lower the chassis by 40cm, this reduces height to less than 4m, enabling many operators to run their rake home without removing tines. 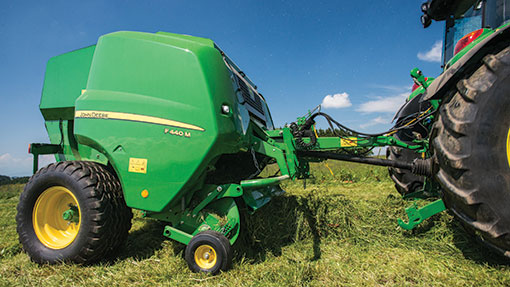 A drop floor to help clear blockages and a five-bar pick-up in 2m and 2.2m widths are features of the new F440R round baler and C440R wrapping baler designed primarily for large farms and contractors producing more than 3,000 silage bales a year.

The MaxiCut HC rotor with 13 or 25 knives is part of the package, monitored and controlled using either a GreenStar Display 1800 or new Implement Display 1100.

The F440M round baler is a multi-purpose machine for 1,000 to 3,000 bales of hay, silage or straw. It comes with a 2m RotoFlow HC or MaxiCut HC 13-knife rotor and features a heavy-duty feeding system, new driveline and rotor, stronger shielding and tyres that are both wider and taller.

The latest Roll-Belt variable-size round balers are said to achieve 5% higher density and up to 20% greater output than their predecessors.

Key changes include a new pick-up in 1.8m and 2m sizes with a choice of “standard duty” four-bar configuration for straw and “heavy duty” five-bar design with stiffer and longer-lasting reinforced rubber tines for grass.

A feed assist roller between the pick-up and plain or crop cutting intake rotor can be added to help bring the crop flow to the width of the chamber and the new intake drop floor helps ease grass plugs from beneath the rotor. 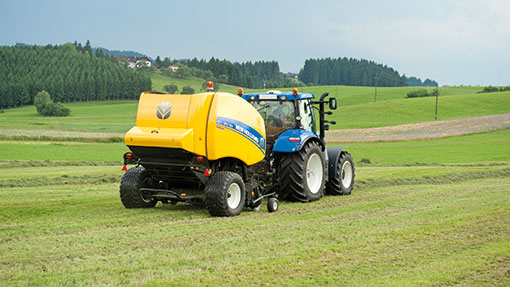 Bigger output potential is claimed for the latest version of JF-Stoll’s trailed forage chopper. Among upgrades creating the FCT 1460 MD is a stronger and more service-friendly feed roller drive line, with each of the four chop lengths – nominally 6-32mm – now set using a gearbox selector.

The new Jaguar 800 series SPFHs have Tier 4i-compliant Mercedes engines fitted with an SCR catalytic converter. A noticeable benefit of these engines is their high torque at low engine speeds, says the company, and operators of pre-series machines working in the UK last season are said to have found that they have been able to achieve higher throughputs and lower fuel consumption compared to previous similar-sized Jaguar 800 models.

Jaguar 870 and 860 models get the company’s Dynamic Power system, which in DLG trials has resulted in fuel use savings of 12.3%.

As the crop volume through the forager varies, the system automatically varies the engine power output over an 11-step range from just 272hp up to 510hp on the Jaguar 860 or 598hp on the Jaguar 870, while ensuring that the engine can maintain its optimum engine speed of just 1,800rpm.

The new Vista cab is said to be more spacious and has better visibility. Setting up and operating the Jaguar 800 has been simplified thanks to an updated version of CEBIS, which incorporates new features designed to provide easier, faster and more intuitive operation. 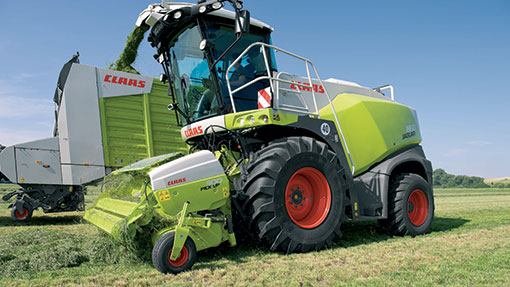 New Jaguar foragers should kick out high torque at low revs, according to Claas.

The BiG X 480 and BiG X 580 self-propelled forage harvesters are aimed at contractors and large farms with smaller acreages to chop than current models are designed for.

Power outputs from the six-cylinder MTU engines are 455hp with 489hp max available and 551hp up to 585hp, with the transverse installation minimising power loss by transmitting drive directly via polybelts to the chopping cylinder and crop discharge accelerator, and to the ground drive and front end drive hydraulic pumps.

Inside, Krone’s VariStream crop flow system – comprising a spring-loaded floor beneath the chopping cylinder and a spring-loaded plate behind the crop accelerator – is standard to accommodate uneven swaths. 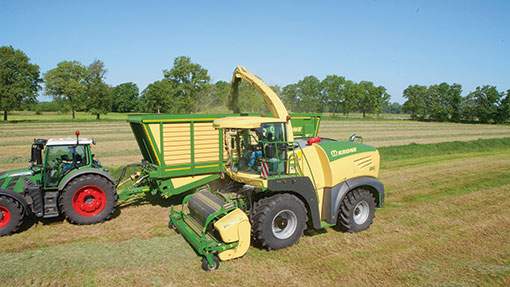 Hood design maintains a consistent gap to the conditioning system on the John Deere 830 trailer mower-conditioner.

Vredo’s latest Agri Air overseeder can handle double the quantity and a greater variety of seed, says UK importer JC Machinery. It comes with the same large pneumatic seed hopper as the existing Vredo Agri Twin overseeder and is available in 4.4m and 5.8m working widths and with hydraulic pneumatic seed distribution.

Doubling the seed capacity (450 litres instead of 220 litres) and using a hydraulically driven fan instead of an electrically powered one enables the Air to handle other seed types (such as rye or barley), which are increasingly sown as green manure in existing grass or stubble.


The increased airflow helps these heavier seeds to be evenly distributed to the overseeding disc-pairs.

The overseeders are also equipped with the firm’s proven dual-disc system which are said to deliver a germination rate of 96%. The pairs of discs, set 7.5cms apart, guide seed into a V-shaped slit in to the sward. The seed is then covered with soil to protect it from external predators and extreme weather conditions helping get a quick germination and deep rooting of the injected seed. 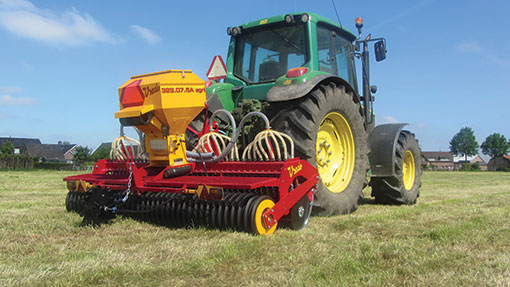