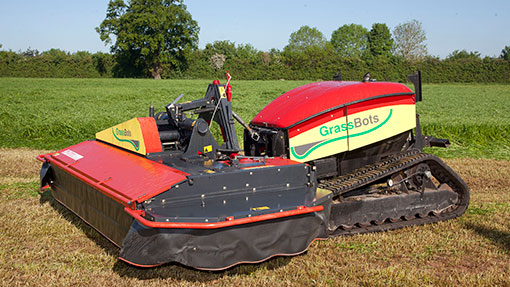 One of the more unusual machines at the show was Kongskilde’s unmanned Grassbots self-propelled mower. It consists of a 2.2t tracked power unit equipped with a JF CM365F front mower and is part of a two-year EU project aiming to find ways of harvesting grass for biodigesters in wet, low-lying areas where conventional tractors would get bogged down.

The project involves two universities – Aarhus and University of Southern Denmark. The simplest way of operating the mower is with a radio control unit of the sort that you’d use a model airplane. However it has some clever tricks up its sleeve, says Kongskilde Development engineer Alea Scovill, For a start, you can plot a GPS boundary line that will ensure the mower stays within the perimeters. The Grassbots unit will then automatically choose the most efficient way of mowing that area with an accuracy of +/- 5cm.

See also: Read all the news from Grassland & Muck

One of the key worries with any unmanned piece of farm machinery is safety. What happens if a walker decides to amble over to look at the machine working? To deal with that eventuality the Grassbots vehicle is equipped with a rotating laser scanner that works like radar – if it detects something in the way, it stops.

Though the project is about developing lighter machines for harvesting grass in boggy areas, Ms Scovill says that these sorts of machines could be the answer to the increasing problem of compaction on farmland caused by 10t tractors pulling 15t trailers. Using several unmanned smaller machines could help break the cycle of heavier and heavier machines being required to deal with the effects of compaction.