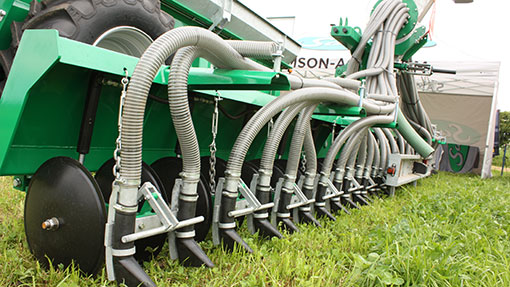 Samson UK was showing a substantial 8m grass injector from Danish maker Samson. Called the TE injector, it’s a single-disc machine that is largely aimed at farmers and contractors with digestate from biogas plants to deal with.

It can be used in both grassland and arable situations, says Samson UK’s Steve Berry, and typically injects at a depth of 50mm in grass and 50-75mm in arable fields. Digestate application rate is typically 20-30t/ha and forward speed is 7-8kph.

While it doesn’t have the working width of a 24m drip-hose application system, it gets the liquid straight into the ground and makes the nitrogen immediately available.