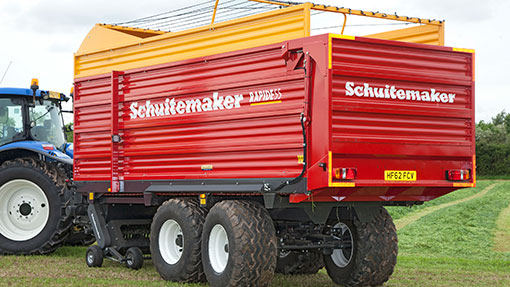 Dutch company Schuitemaker, which sells about 200 forage wagons a year, was showing its Rapide 10-series 55 forage wagon for the first time at Grassland and Muck.

It’s intended to be an entry-level model aimed at farmers rather than contractors and holds 31cu m of grass, which is a bit less than the 30-36cu m machines now widely used.

See also: Read all the news from Grassland & Muck 2014

However, it’s still a gearbox-driven model rather than chain driven and tandem pendulum axles and high-spec brakes are fitted. Pick-up and rotor are 1.8m wide and the 43 knives have two cutting edges and are said to be simple to change. At 5.93m, it’s also relatively short.