Morning mizzle did little to dampen the spirits of manufacturers and visitors that turned out to 2016’s Scotgrass event near Dumfries on Wednesday, 18 May. David Cousins and James Andrews donned their macs and went in search of some of the latest machinery developments

Unlike most tractor makers that offer buyers the choice of just one or two colour and trim options, Valtra gives its punters a pretty much limitless list of choices.

As standard you can choose from one of eight factory colours, but if none of these tickle your fancy, there is the option of sending it to the Unlimited studio.

Here tractors can be given almost any form of cosmetic surgery, from gold vinyl wrap – in the case of the N174 Direct on show at Scotgrass – to full carbon interior trim, coloured leather seats, TV screens and DVD players. 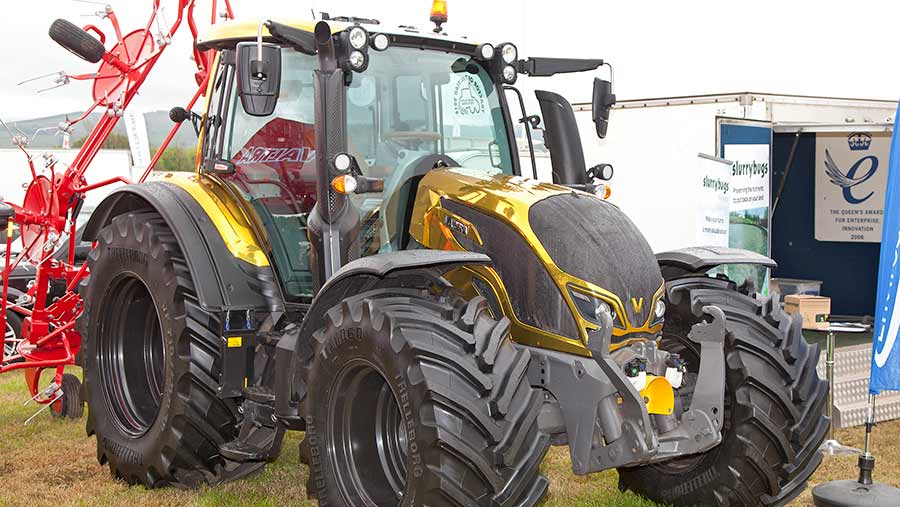 According to Valtra, about half of its new tractors are now taken off the production line and sent to the Unlimited studio for some form of modification.

Not all of these are sent for cosmetic work though. The studio also has a more serious side, producing the maker’s forestry-spec machines and adding features such as fuel heaters for chillier climates.

Manufacturers of zero grazers were out in force at this year’s Scotgrass due largely to rising demand from dairy farmers looking to cut feed costs.

One of these was Italian firm Riberi with its latest RS100 machine, imported by Barnaboy Enterprises.

It has a Galfre twin-drum mower on the front that feeds grass into a slow-moving elevator, before it drops into the 36cu m box. A hydraulically driven chain and slat floor then transports the feed to the back.

An optional rear dispensing unit is also available for those who want to feed out directly from the box. 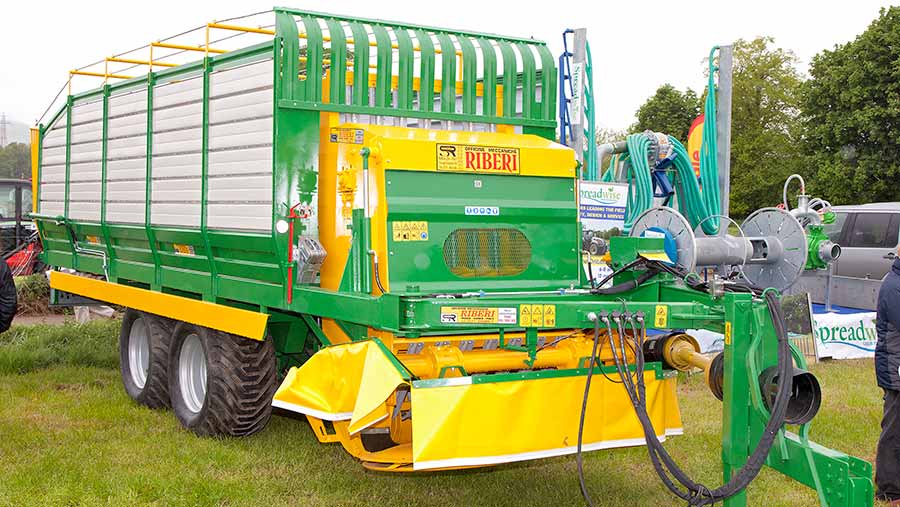 According to Barnaboy Enterprises, sales of dedicated zero grazing boxes are holding up well, even though some producers are managing to do the job with a forage box and front-mounted tractor mower. They say that’s because the zero grazer is gentler on the grass and maintains a higher feed value.

This smart-looking Marshall grain and silage trailer never quite made it to a show stand, but we thought it was worth a mention.

It’s one of the maker’s compact QM1200 machines that was launched back in 2012. It comes specced with silage sides, a hydraulic tailgate, sprung drawbar and 550 45 R22.5 tyres on 80mm, eight-stud axles. 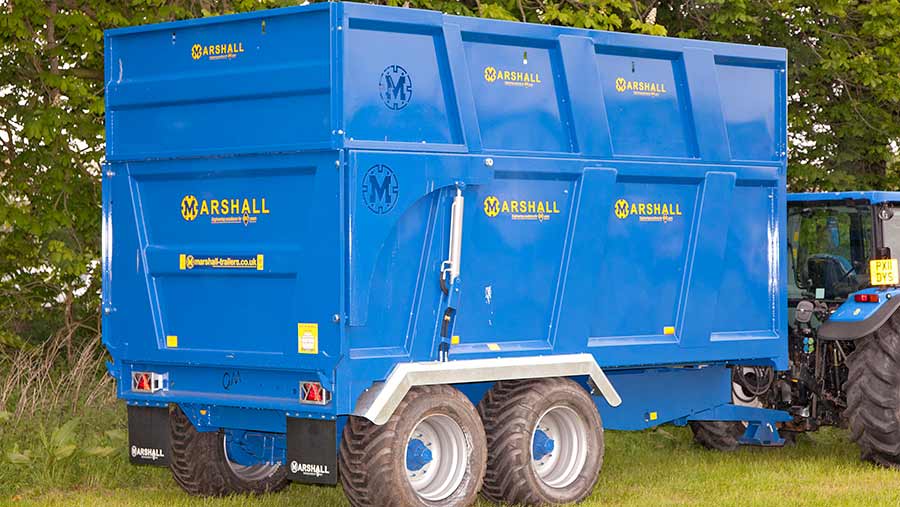 The monocoque body holds 12t and it has a 5mm thick steel floor, 4mm sides and diagonal side bearers to improve rigidity.

This particular trailer is sitting on standard-spec running gear with hydraulic brakes, but there is an option to upgrade to 10-stud commercial axles with air brakes and ABS.

Vicon’s nifty non-stop round baler/wrapper has been in development for the past four years, but Scotgrass 2016 was one of the first opportunities for farmers to see it working.

The aptly named Fastbale manages to keep moving when traditional balers would have to stop thanks to having two separate bale chambers, one in front of the other.

This means that when a finished bale is being tied in the rear chamber, the next one can start forming in the front one without the driver having to stop.

As soon as the tied bale is ejected into the wrapper unit, the bale that was started in the front chamber then transfers into the back one to be finished.

Clearly, such a complicated set-up has taken a while to perfect, but Vicon says it will soon be taking orders for a limited number of machines. These are likely to be delivered for next year’s silage season.

Unfortunately, prices haven’t yet been confirmed.

This spring will be the first outing for production models of John Deere’s flagship, 8800i self-propelled forage harvester.

To celebrate the occasion, the maker’s UK team, based at Langar, Nottinghamshire, were chewing through the Scotgrass plots with a black-vinyl-wrapped demonstration machine – which sadly won’t be a factory option for fans of limited-edition machines.

The 8800i’s 843hp is dished up by a 19-litre Cummins in-line, six-cylinder engine which powers a three-speed hydrostatic transmission with 40kph transport speed. 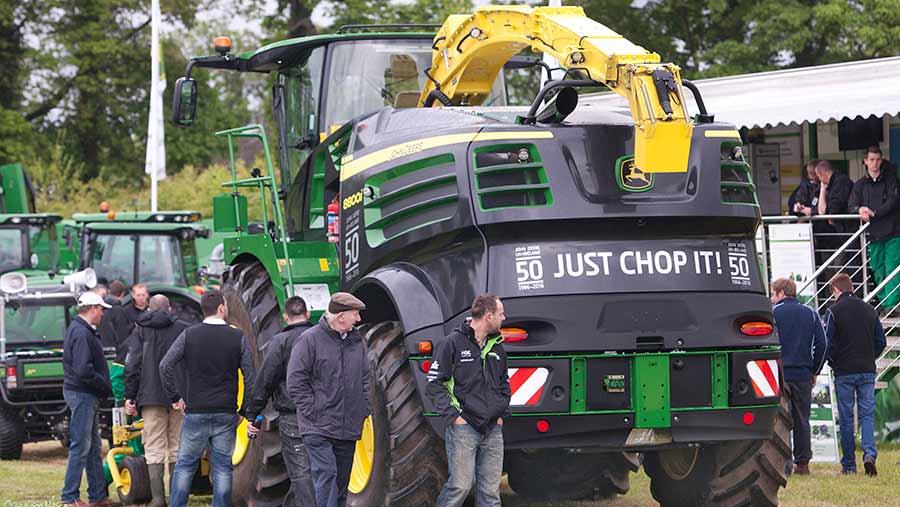 The 8000-series’ Prostream crop-flow system has also been designed to make the most of that power, reducing friction and keeping the crop moving smoothly through the machine.

Revamped versions of New Holland’s popular T6 tractor range were being shown off to UK farmers for the first time.

Most models use four-cylinder, 4.5-litre Fiat engines, however six-cylinder fans will be pleased to hear NH has kept the top-of-the-range 6.7-litre six-cylinder engine in the T6.180 that pushes out 175hp. 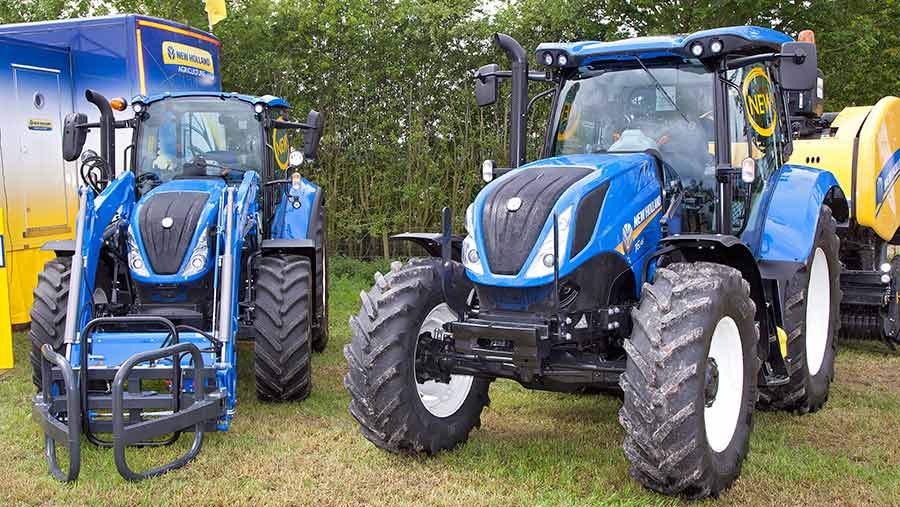 Gearboxes are either NH’s Electro Command powershift or its Auto Command CVT. However, the bottom-of-the-range T6.125 and top-of-the-range T6.180 only come with powershift. The powershift box also has auto-transport and auto-field settings to reduce the amount of frantic gear changing on busy roads.

Cabs have become more sophisticated, too, with dual-zone air-con, a nicer dash and less noise. NH’s Sidewinder armrest unit is available on CVT models and three seats of increasing sophistication are on offer.

The maker’s updated T5-series tractors were also unveiled. They have had a slight power hike, as well as new styling and a couple of in-cab upgrades.

The updated models will be available to order soon and according to New Holland, will cost 7-10% more than the previous version.

Pottinger was showing the latest version of its Torro forage wagon range, which is a bit more versatile than the outgoing model.

The Torro 6010 Combiline has a 60cu m capacity, but crucially it now has an open top so that it can double up as trailer. 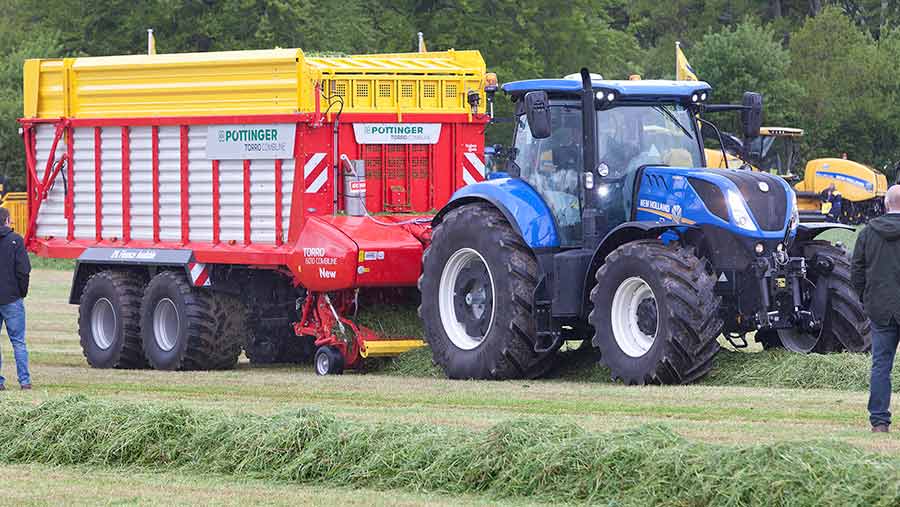 At the front end, the pickup has been widened from 1.85m to 2m and the knife bank has been increased from 39 to 45. These are set to give a 34mm chop, which according to Pottinger will be more consistent in length than the old one.

They are also twin-blade knives than can be flipped over to double their life and there’s the option of an auto-sharpening system for those who don’t fancy doing it manually. 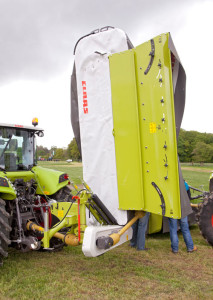 Farmers in the market for a modestly sized offset mower were being shown a reworked version of Claas’ Disco range.

These are available with or without a steel-tine conditioner and come in widths from 2.6-3.4m.

They also now feature the maker’s higher-end max-cut mower bed. This has a wave-shaped leading edge that means the cutting discs can be mounted as close to the front of the bed as possible. There is also a greater overlap between the blades, which is said to give a cleaner cut.

For many people this was the first chance to see Krone’s Mercedes-powered 626hp 630 and 753hp 770 self-propelled forage harvesters in action. Both are updated models that come with a redesigned cutter head. 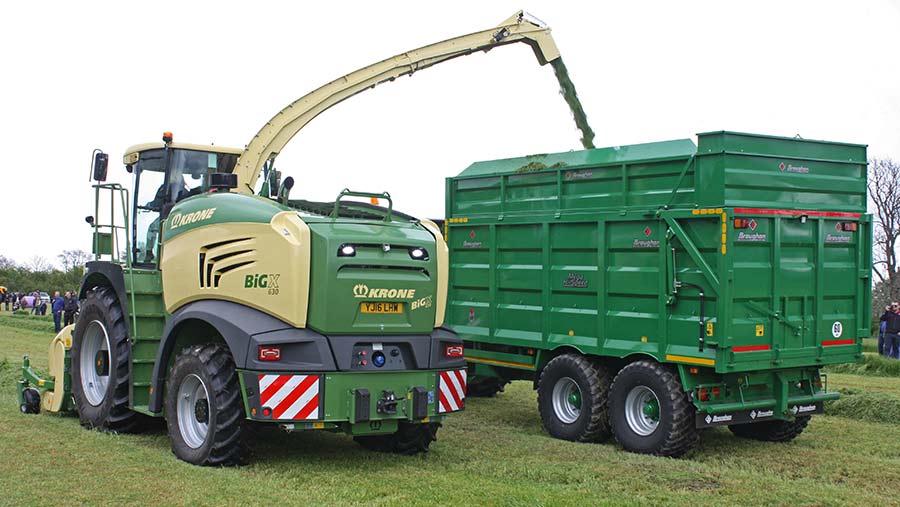 Drums still carry 20, 28 or 36 knives, but they are mounted differently to reduce the wear on the drum and increase the carrying capacity of each knife section.

The 630 models also get a system that allows the operators to adjust engine outputs to suit the conditions. Economy mode is designed to reduce fuel consumption in less power-demanding grass crops, while full power can still be used for energy-sapping maize crops.

The Big X 770 gets a few extra tweaks, including new guards for the wing mirrors, a bigger 10in terminal and 50% more capacity in the central lubrication system.

While most of the grass machinery at Scotgrass was made by big German, Dutch, French, Irish, US and Scandinavian companies, there was scattering of UK machines from makers such as Twose and Teagle.

Cornish  firm Teagle was showing its 8100 feeder bedder, which is available this spring. It is the latest company to use a Bluetooth communication link between the operator and the driver. The main benefit is that there is no cable running between the machine and the cab, so there’s no danger of dust and noise getting into the tractor cab. 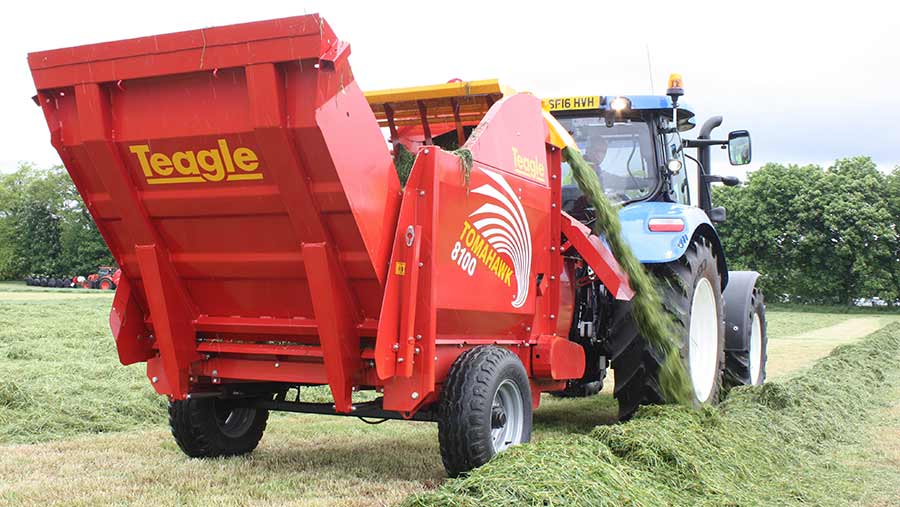 As the name suggests, the machine can be used for two different tasks. One is to chop and spread straw up to 22m into cattle yards and the other is to feed out either clamp or bale silage along feed barriers.

There are three chute options – a side version for delivering  just to the right-hand side for greater blow distance, a 280deg swivel chute and a twin version that can do both. You can also switch between chutes at the press of a button.

Sharp-eyed showgoers at Scotgrass may have noticed what looked like the first arrival of Massey Ferguson mowers, rakes and tedders.

In fact, these machines have been on sale for a while, but they were sold under the Fella name and were made in the Feucht factory of MF’s parent company Agco when MF bought the firm in 2011. 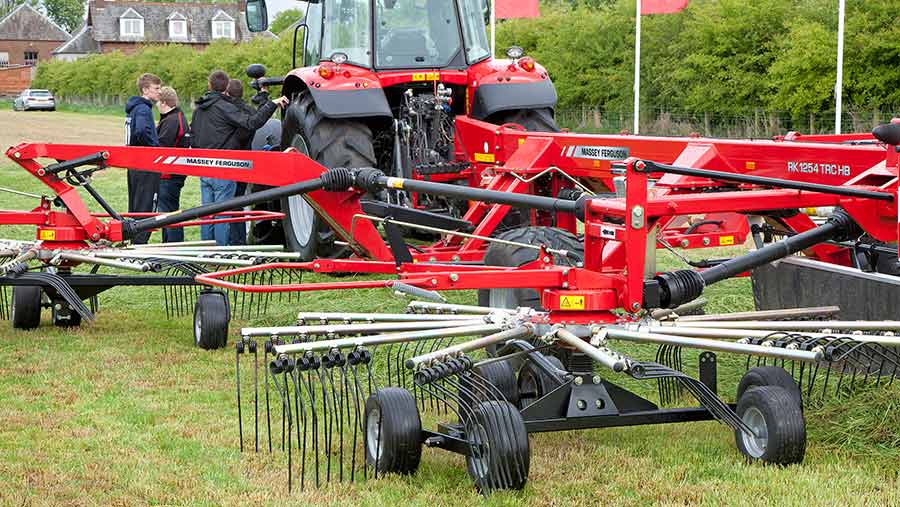 In the UK they were sold by Reco, though that stopped when the company closed at the end of last year.

On-off showers at this year’s Scotgrass provided a timely reminder that damp soils and grassland compaction continue to be a problem for livestock farmers. So it was no surprise that Opico was showing  off its 3m Sward Rejuvenator.

It uses an aggressive Shattaboard with slicing plates, two rows of heavy-duty harrow tines, an Air 8 grass seeder and a Prisma roller. 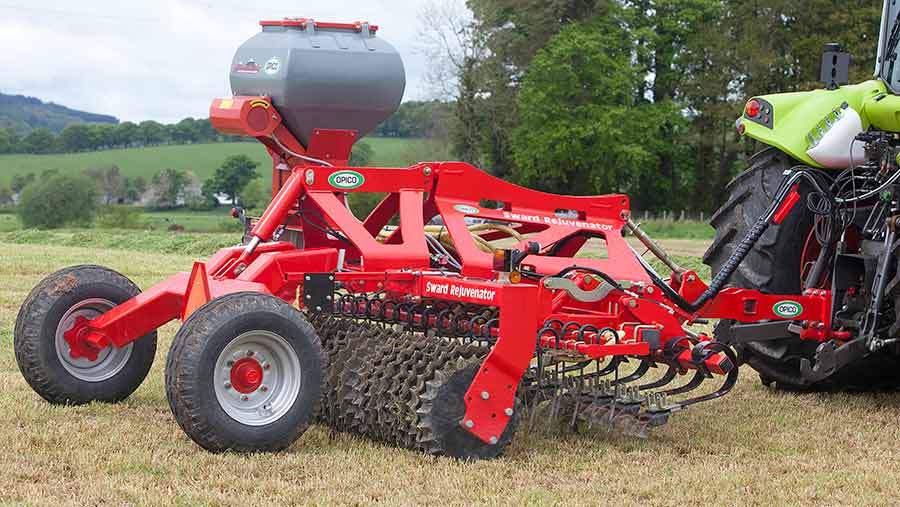 The idea is that the slicing plates and harrow tines break up and level the soil surface in front of the grass seed outlets, with the Prisma roller firming the soil behind.

It can also be used – minus the seeder – for harrowing grassland to remove trash and stimulate grass growth, and for molehill leveling.

One of the more unusual pieces of equipment on show was the Slurryquip system from Downpatrick in northern Ireland. The company has been selling the system in New Zealand and Australia for more than 20 years years and now plans to offer a range of items in the UK. 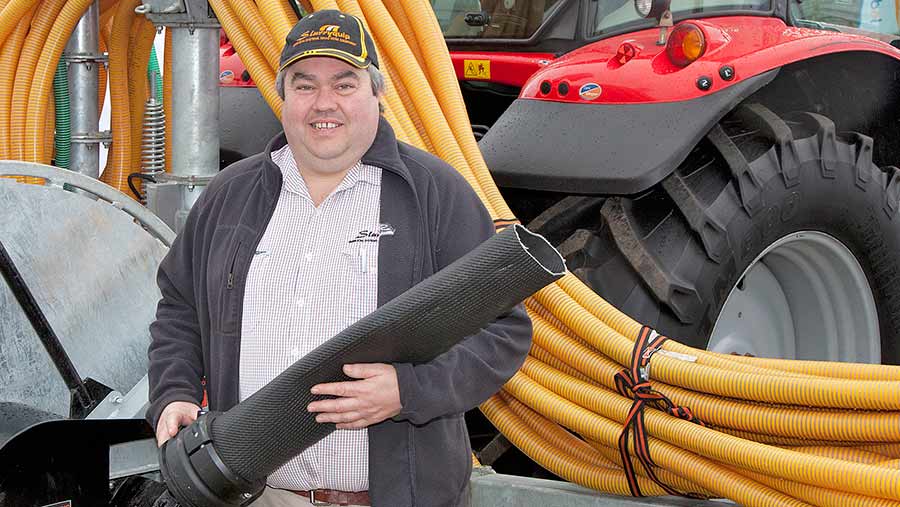 Contractor versions are also available and go from 200cu m/hour to 270 cu m/hour, with a standard contractor system comprising one reel of 130mm (5in) and one reel of 150mm (6in), plus a 9.5m dribble bar and Bauer pump.

All the Slurryquip reels are suitable for front, rear or implement mounting and max lengths are 1,200m for the 4in, 1,000m for the 5in and 800m for the 6in. Spreader bars come in two- or three-jet forms and all have a flowmeter as standard. The dribble bars are available from 7-15m widths.

All the reels have a drop-out facility and can be supplied with single or double motor drive. They can be operated by a remote control system with a 5km range.