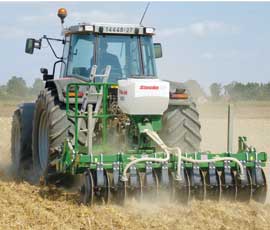 Low surface disturbance subsoilers are being mooted as the ideal way of establishing oilseed rape. Emily Padfield looks as some of the kit available.

Using a subsoiler to establish oilseed rape is an increasingly popular method for those looking to complete the job in one pass. And using low surface disturbance tines avoids dragging clods up from below and creating a coarse seed-bed, which results in poor seed to soil contact, says independent machinery specialist Philip Wright.

“Not disturbing the surface also helps keep the number of weed seeds emerging at planting to a minimum and hence reduces competition.

“Of course, it is preferable to encourage weed seeds to germinate before planting, but it’s not always possible in the timescales for establishing oilseed rape,” he says.

Although the aim is to reduce surface disturbance, it remains vital that sub-surface loosening is still effective.

“Cutting down wings or reducing loosening actions needs care. If it results in a good tilth but inadequate sub-surface restructuring, then overall crop establishment could suffer.”

If soils are tight or damp at depth then sometimes ultra-low lift tines, like normal tines, can smear or compact upwards and have a negative effect on root penetration, warns Mr Wright.

“Dig to check, and set the tine to loosen through this. Any tine needs adequate lift height to lift, shatter and loosen.”

“Longer wings can be more effective when conditions are moist, as a steep wing lift angle can cause a more compressive soil action. In these cases, lengthening a wing – even by adding a plate to the back of an existing one – can be most effective,” he says.

“Last autumn, there were quite a few examples showing loosening tines having just smeared upwards and sideways at depth in wet soils and the crop generally struggled once the roots reached the compacted zone at depth.”

Great Plains has offered LD tines (see picture above) across its Simba cultivator range for several years and is developing additional tine configurations to give farmers more choice over how they spec their machines, says UK sales director David Holmes.

The LD leg is designed to rearrange the soil below the surface in order to improve drainage and root penetration, while avoiding forcing clods to the surface.

“This maintains the valuable fine aggregates on top and avoids bringing raw un-weathered soil into the seed-bed,” says Mr Holmes.

Machines available with low disturbance (LD) tines include the Flatliner, X-Press with ST Bar, DTX, SL and the SLD.

“Our most popular machine for one-pass establishment is the DTX, which is available with Pro-Lift or LD tines with shear bolt protection or hydraulic auto-reset. It is also available with full or limited disc angling and a choice of six rear rollers in 3m and 3.5m formats.”

The DTX is capable of working to 400mm depth and suitable for heavy land or stony conditions. A choice of wings is available depending on soil type and the required lift, and these are followed by two rows of adjustably angled discs.

The key, says Mr Holmes, is to dig and check the soil profile before you start in each field in order to detect if compaction is present and what depth it is at.

“Then you can choose what wing will have the most benefit and to what depth the machine should be set at.” 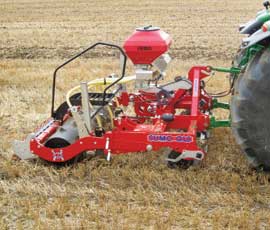 Perhaps one of the most popular machines for one-pass establishment is the Sumo Trio, and for those wanting to go down the low-disturbance route, simply taking off the disc unit can alter the Trio to allow just that.

In addition, the company now offers low-disturbance points for both the Trio and Sumoseeder through local dealers.

Another route for achieving low disturbance is the GLS grassland subsoiler, and there are plenty of these being used for oilseed rape establishment, says Sumo’s Rachael Walshaw.

The Sumo GLS is designed to reduce structural compaction, improve land drainage and leave a soil environment that is aerated. Crops should be more able to withstand periods of drought or prolonged rainfall, she says

“Seeds are broadcast in narrow bands behind the leg, and the design of the leg means the surface remains largely unmoved.

“As a result, this system discourages weeds from germinating and competing with the emerging seedlings,” she says.

The GLS comes in four and five leg versions, with others available. Working depth can be adjusted from 100mm to 355mm and auto reset is standard. 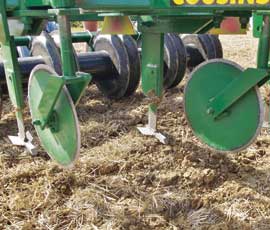 Cousins has been adapting its subsoilers for oilseed rape establishment with the help of independent crop specialist Hutchinsons for the past several years and initially offered a rape drill conversion kit for its V-Form machine.

As the wing travels through the soil, it stands the soil back up and moulds the soil back over the seed, in effect sowing in a 38mm loose mound, which enables the seed to establish a good root structure without resistance, says Mr Neale.

The Cousins MicroWing adopts the principles of the original V-Form design – but in a shorter, straight frame which is lighter and easier to pull.

The new model has 10 subsoiler legs with MicroWing tines and aligned Razor Rings which only press in the moist leg zone, like the original V-form.

The new MicroWing tine and Razor ring Leg Zone can be retro-fitted to all Cousins V-Forms. 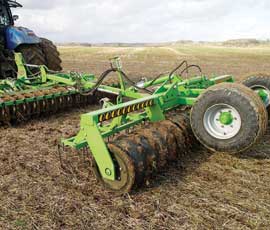 Cambridgeshire manufacturer Tillso offers a series of low- disturbance tine options for its Advantage subsoiler, as well as retrofit options for other makes of machine.

The idea behind the Sabre tine is to restructure the soil at depth without moving too much soil at the surface, explains Chris Lane of Tillso.

Sabre tine wings are formed using simple replaceable slats, each with a twisted profile that reduces draft requirement and channels soil flow inwards after the leg.

This helps reduce the chances of the wing “slicing” through the soil in moist conditions, says Mr Lane.

“Aggregates are also rearranged as they fall off the slats, resulting in a permanent loosening effect, and the whole soil profile is restructured beneath the surface.”

“The Sabre Max is designed for conventional, deep restructuring work and minimal surface disturbance at 600mm to 750mm spacings and between 225mm and 450mm depth. For stony soils there’s the option of a double slatted wing which prolongs life.”

The Sabre Lite wing is interchangeable with the Sabre Max and is designed for tine spacings between 400-600mm and for shallow compaction issues to a depth of between 200mm and 300mm.

Finally, the Sabre UltraLite is for subsurface compaction and uses the standard Sabre point and shin with a shallow Ultra wing, available in two lengths for different working depths. 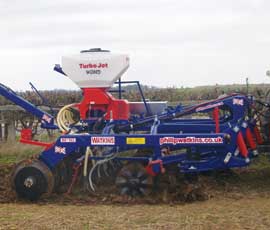 It is also used on the firm’s grass subsoiler and has been developed to restructure the soil at depths of between 150mm and 330mm while leaving minimal surface disturbance.