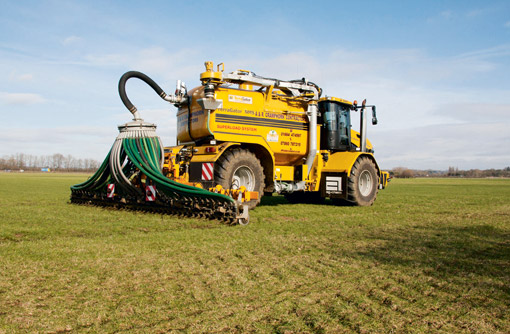 Slurry inoculants, which range widely in price from 10p a cow a week to £1, are sold with a range of product claims – but how do you know which one is best?

Kingshay put five different brands to the test and concluded that they were cost effective, although some had a better net benefit than others.

“There was a positive response from all five, so in theory, treated slurry is a more useful product as a fertiliser than untreated slurry,” Peter Shipton, Kingshay’s technical director, says.

“All the additives trialled returned more in fertiliser value than they cost to buy.”

But the more expensive additives were not necessarily the most effective. “There wasn’t a great difference in their ability to improve nitrogen value,” Mr Shipton adds.

At Mill Farm, in Middlewich, Cheshire, John Oakes first used a slurry additive three years ago and has cut his fertiliser bill by half.

Mr Oakes, who runs a herd of 120 Holstein Friesian cows, adds the inoculation to the farm’s 225,000-gallon slurry store and a 80,000-gallon slatted floor tank.

He has reduced his bagged fertiliser application to 45 units/acre/year. “The cost of the additive is negligible compared to the savings we are making. The real cost is in hauling the slurry to the field to inject it. We pay a contractor £38 an hour, but we would incur this whether we treated the slurry or not.”

The benefits he is getting from treated slurry are encouraging him to make better use of it. In the past, all the slurry was applied in the spring and was followed by applications of fertiliser.

Mr Oakes now uses slurry on all three cuts of silage and on the grazing rotation. He also spreads it on the fields used for growing 19 hectares of forage maize.

Crusting is no longer an issue on the lagoon surface. “We had been getting a 12 inch crust, but now it is just an inch or two. We are saving on fuel costs because we don’t need to stir the slurry for as long before we spread it,” says Mr Oakes.

Dairy consultant John Crimes, of CARA Wales, says one of his clients who uses an additive has reduced the time he stirs his lagoon from three days to half a day. “There is very little crust and the slurry mixes consistently,” he says.

But in terms of nitrogen benefits, Mr Crimes’ opinion is farmers can get equivalent value from paying attention to when and how they apply their slurry.

“The nitrogen available to the crop can be doubled by timing the application for April rather than December or January because the plant is in a better position to take it up,” he says.

“I have a few clients with 150- to 200-cow systems who spend £1,500 on slurry additives. In today’s prices that is equivalent to five tonnes of fertiliser.”

But Mr Shipton believes if farmers can get an additional five tonnes of nutrients from slurry then that’s what they should do.

“None of the additives we trialled were as good as the manufacturers claimed, but there is a lot of potential for them to help farmers make better use of slurry and that is the direction the industry needs to be taking.”

The Kingshay trial showed the benefits of some of the additives declined over time. Mr Shipton says farmers need to ask if there is a benefit in adding an inoculant all winter or if they are better off using it for an intensive period before spreading in the spring.

Keep up with the latest news from the Livestock 2013