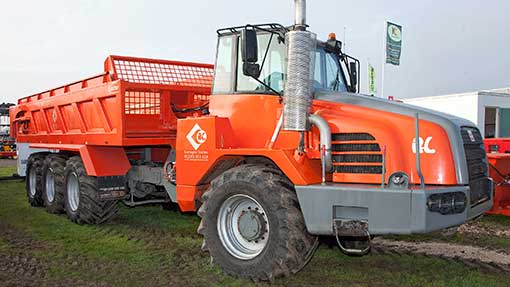 This striking-looking 350hp self-propelled chaser truck on the Larrington stand at Lamma brings together a five-year-old Terex 30t dump truck and extended-chassis trailer.

It came about as a collaboration between Richard Larrington and Wisbech contractor Nigel Harrison, who was looking for a vehicle that was light on its tyres, quick across the fields and easy for the operator to drive.

As well as having 350hp under the bonnet, the vehicle has eight wheels shod with 750/50 x 30.5 wheels and a tread pattern that clears soil off the tyres quickly.

The aim was to reduce the weight of the truck as much as possible, while retaining the strength and improving the ride. So the chassis was rebuilt with axles on air suspension and a third steering axle was added at the back of the trailer.

A 20t ejector body was added, allowing the trailer to pivot from the front so it can discharge its load straight into a truck or trailer standing on a road or headland track. A headboard pushes the crop swiftly from front to back and Mr Harrison reckons that a load can be discharged in just 40 seconds.

He says that the chaser truck is equally suitable for delivering seed potatoes to the planter, grain into a lorry or trailer, potatoes to the headland or sugar beet for making a heap for a maus-type cleaner/loader.