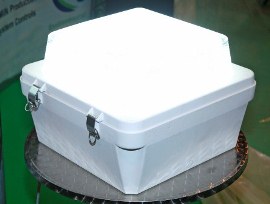 US firm VES Environmental Solutions used its first appearance at the Livestock Show to show off its intriguing Enviralight.

It is aimed at dairy farmers and claims to give high light levels during the day (especially when it’s very gloomy outside) and a very low light for night-time.

Two different lighting technologies are used. In the daytime an induction lamp is used, with a choice of ratings from 150W to 250W. This is said to have a life of 100,000 hours (equivalent to five years of normal usage), rather better than the typical 20,000-50,000 hours of a sodium light and much longer-lived than the 6-7,000 hours you’d get from a standard fluorescent light.

At night, a 9W LED light (using minimal electricity) gives low light levels to allow cows and humans to see where they are going.

The interest in better lighting in dairy buildings came about some five years ago, when dairy technologists realised that giving a cow 18 hours of bright light followed by 6 hours of near-darkness could boost milk outputs by 10-15%.
VES says that typical light placement would involve each light being about 7m from its neighbour.

So on a typical 55m long livestock building, roughly 21 lights would be needed. Sensors can be used to switch them on and off automatically. The lights also have a five-year warranty on all parts.

Read about the antibiotic test set to cut milk contamination