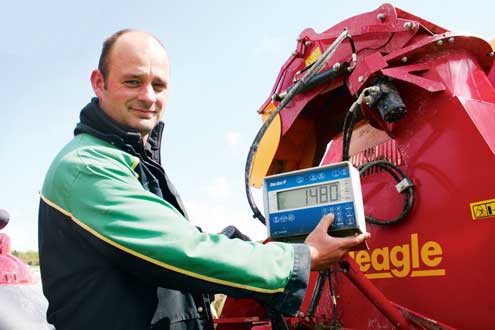 Carcass quality has improved since adding forage maize to the farm’s grass silage cut from two-year leys. All the beef – as well as store lambs and progeny from outdoor sows – is sold through the farm shop.

Using a machine that shreds bales before dispensing forage or bedding into cattle yards has streamlined husbandry on a Kent beef unit and cut straw use by more than half.

Jeff Gibson, who runs a diverse livestock and farm shop enterprise with his father Mike and brother Andrew at Wingham near Canterbury, is enthusiastic about the feeder-bedder’s contribution.

“We started feeding forage maize in addition to baled grass silage this winter and wanted a versatile machine that could mix and dispense the feed efficiently,” he explains. “I tried two different tub-type feeders to process silage bales and found they were slow and fuel-hungry.

“The Tomahawk does the job easily more or less on tick-over and as I’m putting out the ration, so it’s quicker too,” he adds. “It’s also a more versatile machine because we use it for strawing the cattle yard and our outdoor pig arcs as well.”

The beef enterprise was started by raising bought-in milk calves. But now, single-suckled beef calves are purchased through the local market at eight to 12 months’ old and finished in half-covered yards during the following year.

“We’re aiming to finish six Aberdeen Angus-cross cattle a month purely on grass from our high-protein two-year leys or a combination of maize and grass silage,” says Mr Gibson. “We don’t feed concentrates, because eating quality is more important to us than output; we’re happy with a relatively slow growth rate to lay down some marbling in the meat.”

To maximise returns, ration control and straw use are significant factors in helping keep costs in check – and the Tomahawk feeder-bedder is helping in both respects.

“We need to accurately balance the maize and grass, and to put out the correct amount to minimise wastage,” Mr Gibson explains. “The on-board weighing system is useful in that respect – it’s certainly better than guessing – and could be used to accurately record forage and straw consumption if we wanted to.”

When it is dry, the cattle get three 1.5m round bales of straw every two days, which is carried in the 10cu m feeder-bedder from the home farm to rented buildings a little more than two miles away, followed by 3.5t of forage.

“I half fill the machine with clamped maize using a shear grab, then take bites out of silage bales and add them on top,” explains Mr Gibson. “The shredding drums do a pretty good job of chopping and mixing – and although they may not mix as thoroughly as a diet feeder, the machine does produce a nice open feed that the cattle tuck into.”

The yards used to be strawed by driving in with a tractor and loader and shaking straw off the grab; now it is blown in from outside the yard and is an altogether more efficient process.

“We used a lot of straw simply to keep the tractor on top of the muck, but shredding and blowing is what makes a real difference,” says Mr Gibson. “In winter, we were using 22 bales a week, now we’re down to nine.

“That’s a big cost saving at about £35/acre for barley straw and £25/acre for wheat,” he says. “We’re using about 100 acres’ less straw and, of course, there will be less dung to dig out and spread when we clear the yards.”

Get all the latest news from Livestock Event 2013