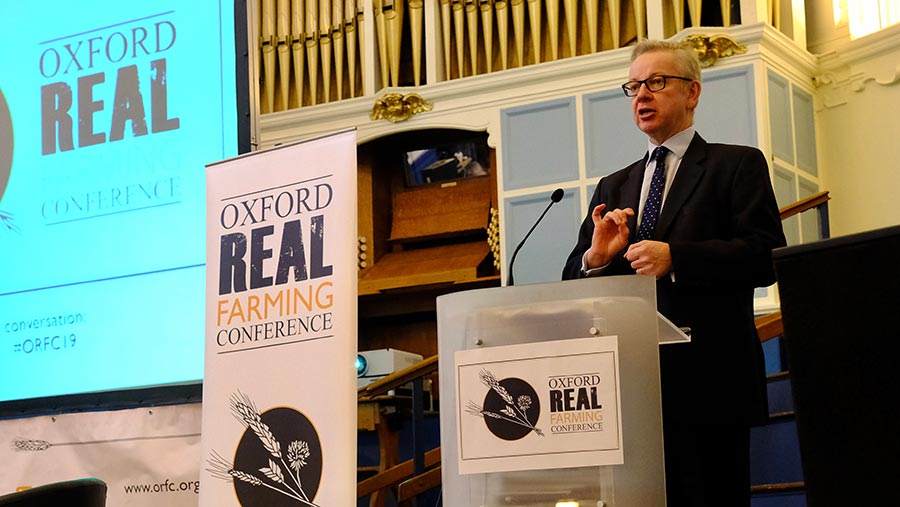 Securing long-term finance for agriculture will best be achieved if the public supports the way their money is spent, according to Defra secretary Michael Gove, and the framework set out in the Agriculture Bill going through parliament provides the best chance of achieving that.

Responding to criticism that the Agriculture Bill contains too few commitments for future governments – especially in terms of funding – Mr Gove said it was crucial to change the way people perceived agricultural support.

In the past, subsidies had been seen as simply giving money to farmers and leaving them to “get on with it”.

The policies of “greening” direct payments under the CAP, and paying for specific measures under Countryside Stewardship, had barely “scratched the surface” of the environmental degradation caused by years of intensive farming, Mr Gove told the Oxford Real Farming Conference.

By shifting payments into a policy based on “public money for public goods”, taxpayers would see that the benefits of public funding went beyond simple food production.

And creating an “explicit link” between public spending and things like cleaner air, better soil and animal welfare would make it harder for future governments to “nibble away” at these measures.

As for the sort of actions farmers could expect to be rewarded for, Mr Gove cited:

He also suggested there would be incentives for carbon sequestration.

And he encouraged delegates to embrace new seed technologies as a way of producing food with less dependence on artificial nitrogen.

Mr Gove also confirmed that the 5ha minimum size rule for receiving support, as currently applies under the CAP, would be removed after the Brexit transition period in 2021.

The Defra secretary insisted that food production was still an important element of future farming policy.

But rather than getting bogged down in a debate about the specific percentages of self-sufficiency, it was important to take a longer-term view.

Given the challenges facing the whole world with regards to climate change and resource depletion, it was sensible to ensure we had a resilient environment and healthy soil, capable of producing food in the decades to come.

As for whether UK farmers would face unfair competition from imports of food produced to lower standards as part of any future trade deal, Mr Gove said it was not the government’s intention, and it would certainly be looking for “non-regression clauses” to be built into any future deals.

Any trade deals would also have to be approved by parliament, and if they did not meet these objectives, it was unlikely they would be approved by MPs.