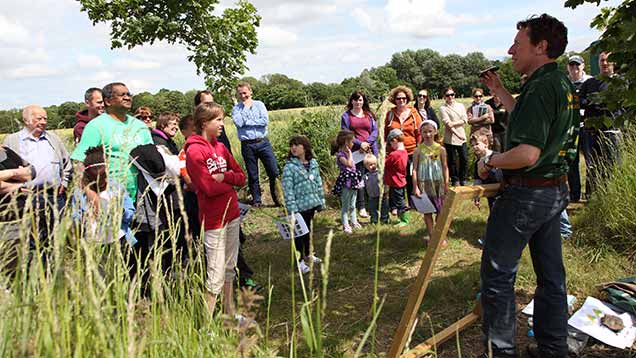 Open Farm Sunday has set a new attendance record with more than 250,000 members of the public visiting events across the UK.

Organisers Linking Environment And Farming (Leaf) said that nearly 400 farms had opened this year on 7 June and estimates showed visitor numbers would exceed 250,000 – beating the previous record set in 2014 by more than 15%.

Annabel Shackleton OFS manager at Leaf said: “Our 10th year has been a resounding success and a fantastic celebration of British farming and food.

“From the feedback received so far, it’s clear that OFS enabled hundreds of thousands of people to have an amazing day in the countryside, learning about farming and the story behind their food. On behalf of Leaf I’d like to offer a huge thank you to everyone involved.”

Farm minister George Eustice (pictured), who joined Leaf’s chief executive Caroline Drummond on a tour of Park Farm, Westerham, Kent, added: “This initiative is a fantastic way of raising awareness of the essential role farming plays in all our lives, helping everyone learn more about where food comes from and inspiring young people to consider a rewarding career in farming.”

As well as widespread media coverage in national papers, TV and radio the #OFS15 hashtag was the UK’s third top trending topic on Twitter on Sunday morning.

Nearly 1.5 million people had seen the hashtag in the month prior to OFS and in the past week the Facebook page reached nearly 150,000 people.

Two new animated videos that were created specifically for the 10-year anniversary of Open Farm Sunday, received more than 17,500 views on YouTube and Facebook.