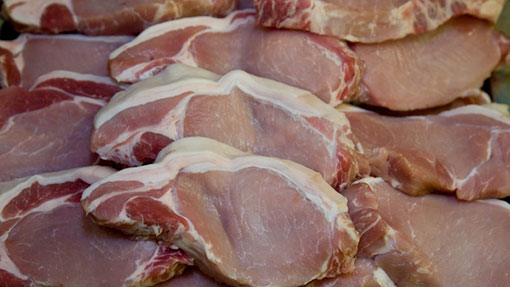 Strong pig prices and successfully breaking into the Chinese market means there is a positive outlook for the UK pig sector, but the disease risk from overseas is a real concern.

Speaking at the Pig and Poultry Fair 2014, BPEX director Mick Sloyan highlighted the contrasting fortunes from the last fair (2012) when the industry was fighting to cover the rising cost of production.

“That fight proved successful and average pig prices increased to peak in the 170s [p/kg] and prices have remained in the 160s while feed prices have eased.

“Productivity has recovered and there has been a gradual improvement in slaughtering. Combined with a rise in carcase weights, we are expecting UK pig meat production to reach 850,000t this year.”

He underlined that this would the sixth consecutive year of growth in UK output [carcass weight].

This rise has been helped by the strength of demand for British pork. “Even cost conscious retailers such as Aldi and Lidl have realised the positive message that stocking only British pork sends to their customers in terms of quality, freshness and trust.”

He pointed to the new BPEX stable isotope reference analysis system in industry traceability, helping to reassure consumer confidence in the product.

It’s not just the home market, exports had grown with the opening up of the China market after years of negotiation. This equated to £335m last year and there is an opportunity to increase exports, he said.

Currently there is a 18p/kg difference between the UK and EU price, partly due to the arrival of African swine fever (ASF) in Eastern Europe, which is affecting EU prices more. “This is twice the level seen in the last five years and equates to an extra £14/pig sold for UK production.”

But there are challenges with the threat from ASF plus porcine epidemic diarrhoea virus (PEDv) in the US. “We are hearing of some units seeing 100% mortality with PEDv”.

It has spread to Canada, Mexico and Japan and there is a real threat to the UK industry, said Mr Sloyan.

Andrew Knowles, BPEX technical head believes the loss of the export would be costly. “If we were to get ASF, exports would disappear. We could see a 30-40p/kg reduction overnight, not just because of the lost markets, but also the impact on the food chain what to do with the product.”

Recognising this threat, BPEX, the Pig Health and Welfare Council recently held a disease round table meeting involving the industry, vets and government to determine what actions can be taken.

Looking at  improved biosecurity, contingency planning and communicating more to farmer about the diseases of concern.”We are working on a plan which hope to have in the summer to tackle this threat.”