Look beyond the glossy displays of the big manufacturers and there were plenty of innovations to catch the livestock farmer’s eye at the 2018 Royal Highland Show.

The Beef Monitor has a false floor and weigh cells to record individual weights each time an animal drinks – maybe six to 12 times a day – and uploads the data to a server, where the information can be accessed and analysed online or via a smartphone.

The device uses an electronic ear tag reader to identify individuals and record their weight alongside the date and time; it also analyses an animal’s earlier records to reject false readings.

In future, says Andrew Edwards of Ritchie, the labour-free weighing system could provide alerts if a significant change in weight gain or drinking frequency becomes apparent, and animals could be grouped according to weight gain performance and fed accordingly.

He adds that more accurate selection for slaughter should result from basing decisions on several stress-free weighings rather than a single snapshot weighing, with fewer individuals failing to meet the required specification.

The Ritchie Beef Monitor is priced at £4,200, with a subscription for data transfer and Cloud storage likely to be £15-£20/month when finalised. 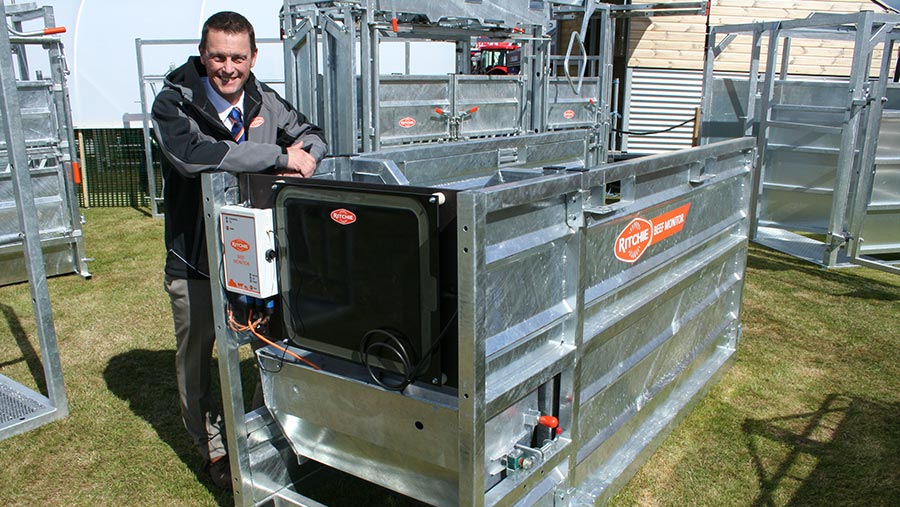 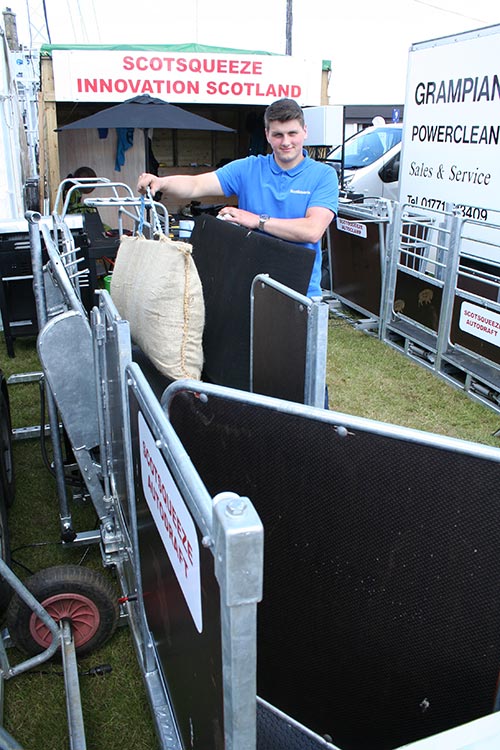 A “magic eye” sensor closes the crush when it detects a sheep, adjusting automatically to the animal’s size so that its head, feet and backside are easily accessible for treatment while barely bending over.

The crush is opened by a pedal or switch on the control panel. The drafting gates and the chassis incorporates hydraulics to remove the transport running gear and set the assembly level on uneven ground, too.

Designed for a throughput of up to 600 fat lambs an hour, the system costs about £14,000 complete with electronic ear tag identification.

Redesigned water troughs for cubicle houses hold a bit less, but are simpler and easier to empty with a view to ensuring cattle always have a clean, fresh supply of drinking water, says IAE’s Paul Scragg.

The tipping version has a simpler handle and unlatching mechanism to rotate it, while the rigid version comes with a slide valve at one end.

Both are available as free-standing or wall-mounted units in four lengths, with prices starting at £460 for the tipper or £380 for the valve version. 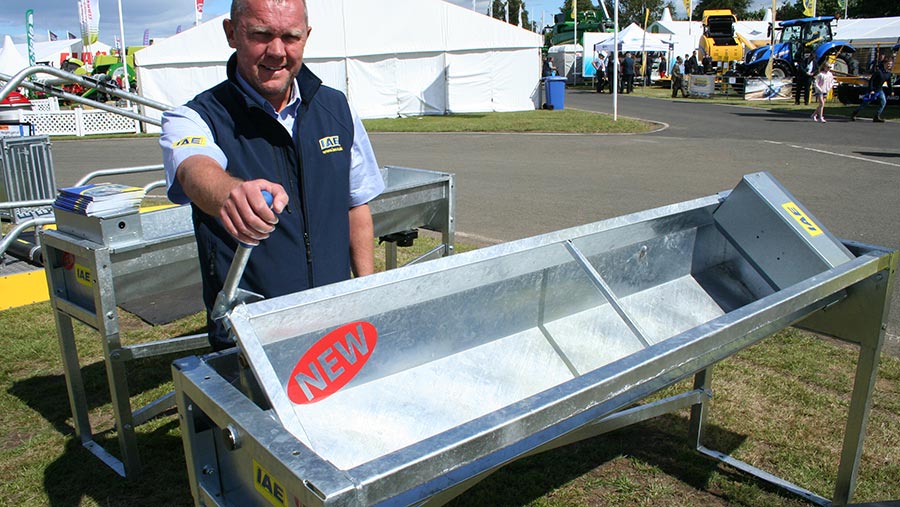 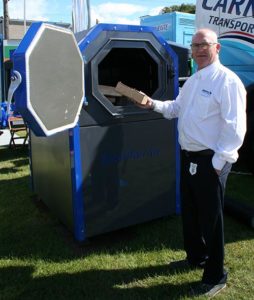 Large boilers burning “clean” waste wood and straw in big bales to heat farmhouses, workshops and offices have been fundamental to the GlenFarrow business.

But a smaller model – resulting primarily from requests from Ireland for burning peat – is attracting interest as a log-burning boiler.

The GF90 incorporates a 1,200-litre water tank to provide a morning supply of hot water before the boiler is fired up for the day, during which its fuel supply needs replenishing two or three times, says Paul Kitchen of the Lincs-based firm.

The boiler needs single-phase 3amp electricity and mains water connections and costs about £8,000 plus installation versus £18,000 all-in for the next-biggest model.

Suzuki unveiled a new KingQuad 750 ATV. It is an evolution of the current model, with the same power, but engine refinements generating more torque lower down.

This, together with a revamped frame and hitch and more effective engine braking and service brakes, has prompted a towing capacity increase from 450kg to 600kg.

National sales manager Harvey Day reckons the new styling give the quad more visual appeal, while installing a headlight on the handlebars improves visibility at night, especially through turns. 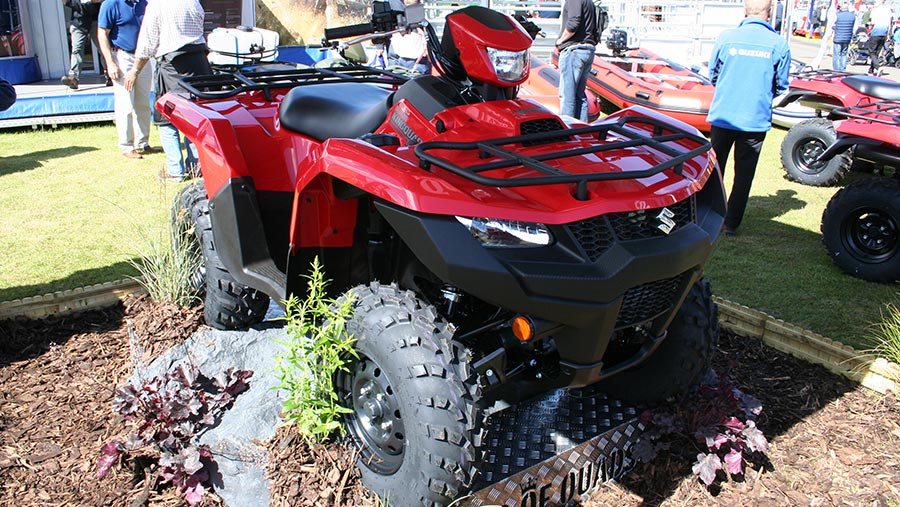 Yamaha brought its latest Kodiak quads to the Highlands for a 2019 range preview.

The Kodiak 700 EPS SE is powered by a slightly smaller-volume (686cc) engine that has updated electronic fuel injection with a remapped control unit said to result in more torque, smoother response and improved fuel economy.

Towing capacity of 600kg makes this a practical machine for farmwork, reckons Yamaha, which will offer the new model in low gloss black or “Back-country Blue” paintwork, offset by a grey seat, front panel and load racks, plus satin black cast-aluminium wheels.

Prices will be revealed when the quad becomes available in September. 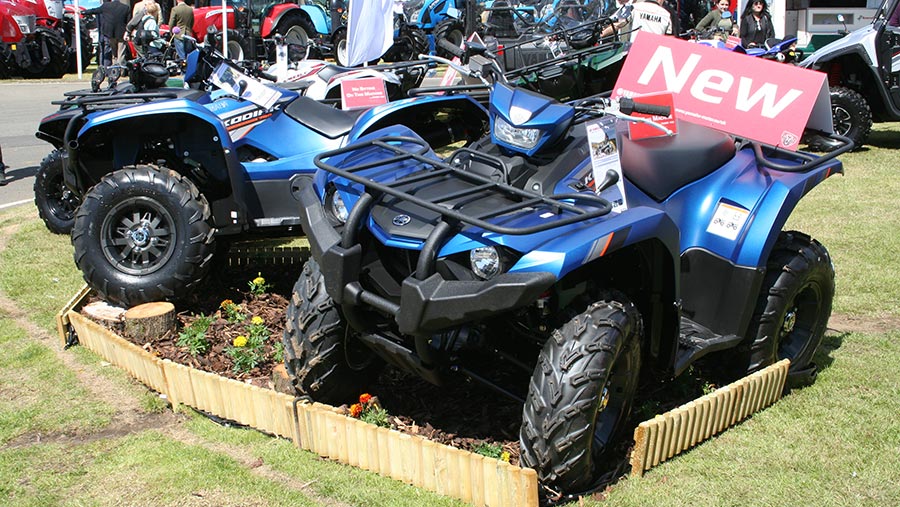 We are used to seeing big-capacity high-spec trailers from Stewart Agricultural, but the small Edge trailers originally designed to fill containers carrying shipments to far-flung export markets such as Australia are now available here.

The Edge 4 runs on a single axle, has a built-in body prop as standard and its tailgate can hinge from top and bottom, and from one side, swinging right round to latch into place.

Hardox steel and twin-pack paint reflect the approach used for the bigger trailers, there are rope rails rather than hooks and a hose storage clip.

The Edge 4 is priced from £5,125 and there are tandem-axle Edge 8 and 12 models that come with LED lights as standard. 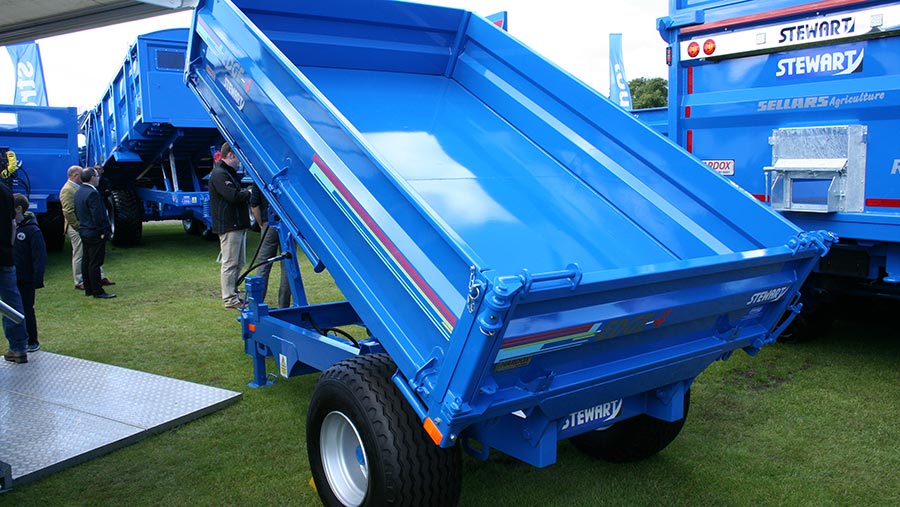 Stewart also presented a new dump trailer with a body built using Hardox steel and the same construction method as on the Pro-series grain and silage trailers.

That means there are no box section uprights (apart from one at the centre), nor any floor bearers as used on the GX-series trailers built from mild steel. The floor and sides are built using thinner but stronger and more resilient material.

These result in some weight saving and a “cleaner” design, says Stewart.

There are 15t and 20t versions; the Construction Pro CP20H on show is equipped with air suspension in place of leaf springs and runs on Nokian CT 560/60R22.5 tyres in tandem formation. 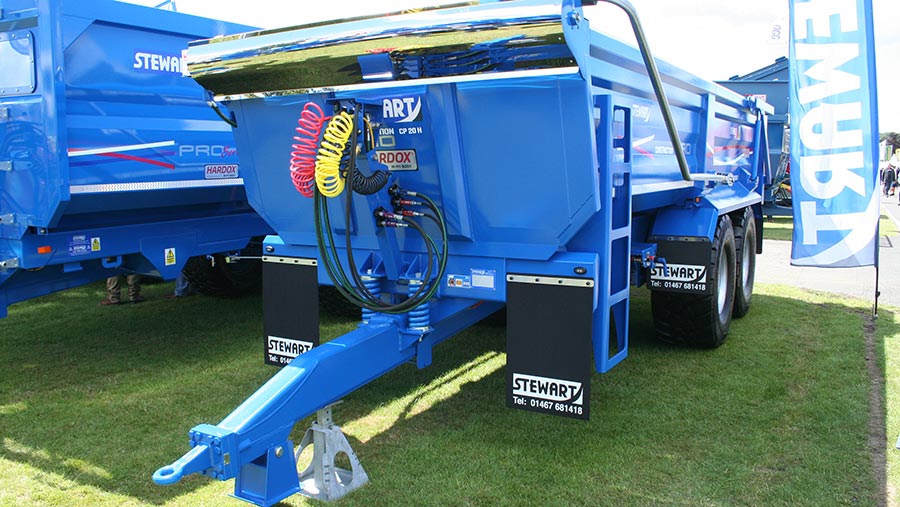 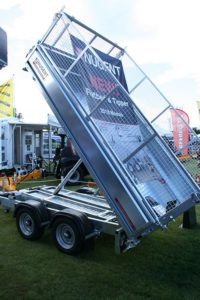 A number of new and improved features aim to refine Nugent’s range of road trailers, including retractable floor lashing points and mesh sides that are now hinged rather than rigid, with a tailgate section that can swing upwards when tipping.

The trailers retain Nugent’s “Dual Drive” parabolic leaf suspension, which positions the end of the leaf between rubber balls and slipper plates for a more progressive and less “crashy” response to bumps and hollows.

The Royal Highland marked the launch of a new 7-series six-cylinder tractor line from Landini, featuring a 30×15-speed (or 54×27 with creep) transmission with six powershift steps – two up on the previous version and more ratios in total.

Intelligent shifting that adjusts to driver demands is claimed for the auto transmission control mode and the tractors can be brought to a halt and moved off again using only the brake pedals if required.

Dual Power boost for pto and transport work is on all models and, unusually, the top three have it for static as well as mobile pto applications.

Dynamic spec brings electronic spools and other eControl features, plus the option of a data screen, Isobus implement control, guidance and so on. 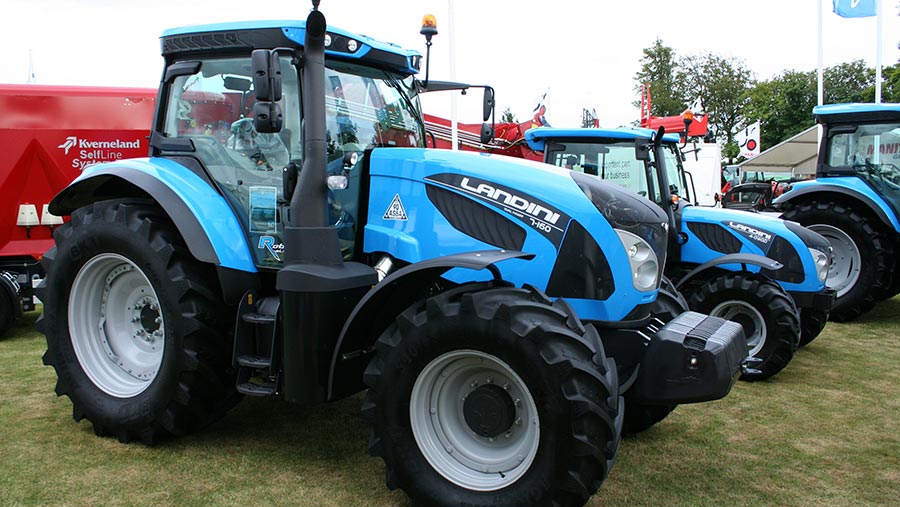 It says Zetor on the hood, but the Hortus 65 is actually a TYM in different colours.

A modern 2.9-litre Deutz engine developing 67hp is matched to a 24×24 speed transmission, with mechanical or powershuttle reverser.

A dual-element gear pump serves up oil at a rate of 39 litres/min for implement functions and the 1.93t capacity three-point linkage, and there is a separate steering pump.

Three-speed pto is also part of the package. 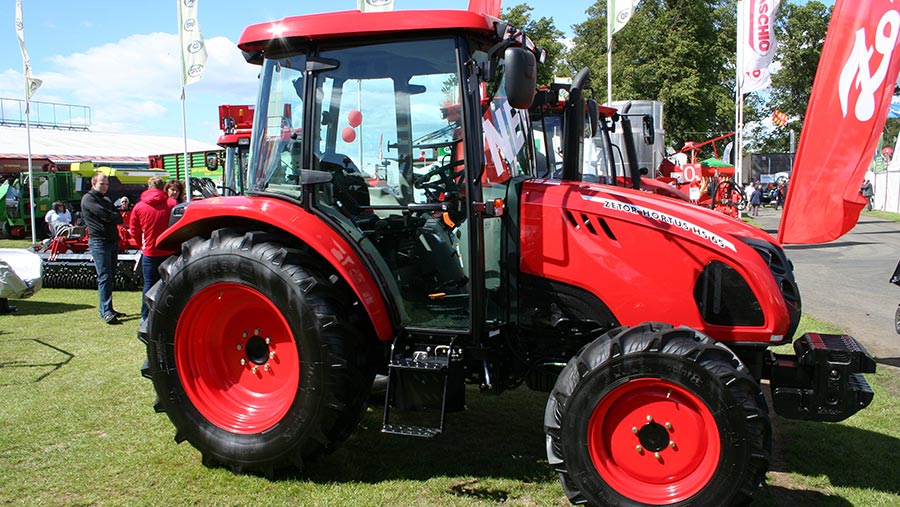 Fancy this job? Charlie Baker of potato fertiliser injector company Target Set gamely demonstrated the prone working position of this electrically driven self-propelled weeding machine, which deploys up to six prone hand-weeding workers, albeit with the benefit of cushions and head rests.

The device, built by Dutch manufacturer De Jongh, can be powered by a portable generator or batteries topped up with solar energy, and self-steers using a guide running along wheelings between beds of salad or vegetable crops. 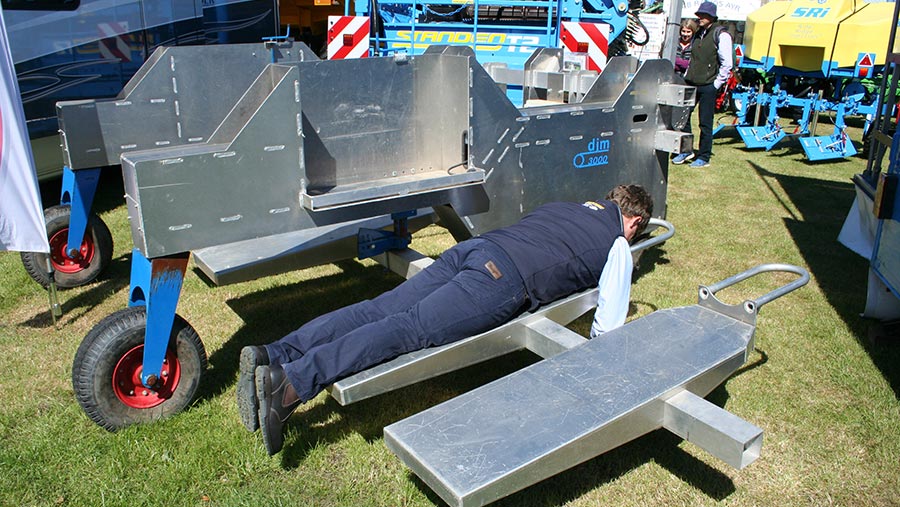 A boom spreader for herbicide granules from Cross Agricultural Engineering is intended for front linkage use while the tractor tows a set of rolls or a light cultivator.

The booms, which incorporate a slotted rail for easy positioning of the splash-plate spreading units, form storage stands when folded upright and a calibration tray is neatly stored in the frame.

It’s priced at £1,500 before any Stocks air spreader is installed. 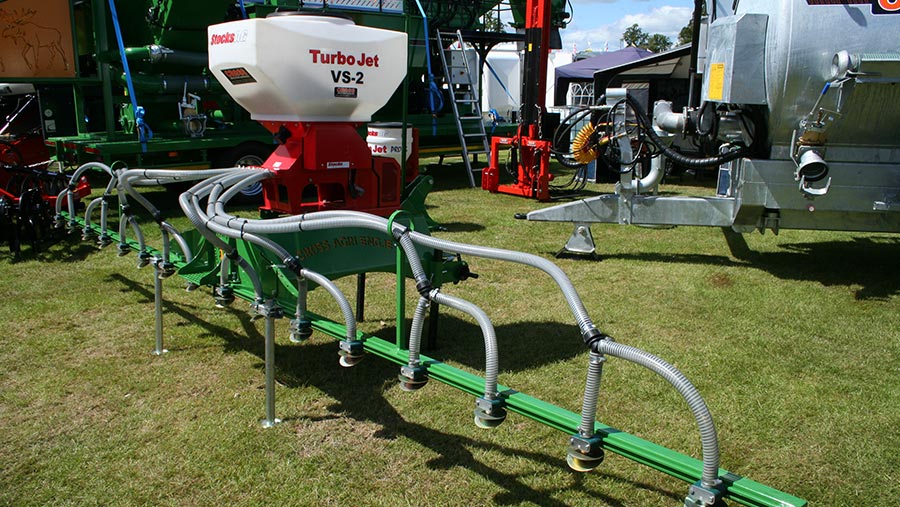