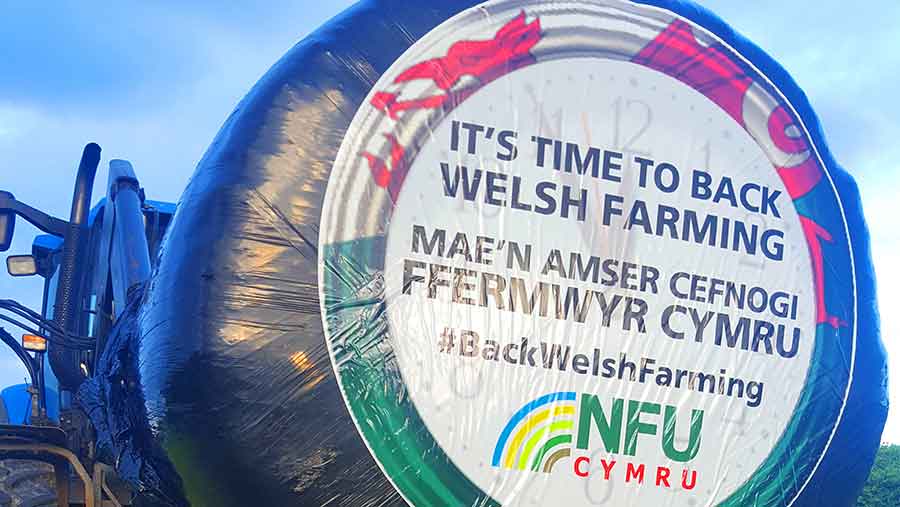 All roads leading to the Royal Welsh showground have been lined with silage bales bearing a message that encourages the public to back Welsh farming.

NFU Cymru has taken the “It’s Time to Back Welsh Farming” campaign a step further, producing bale stickers asking consumers to do just that.

The union has drawn support from farmers with land neighbouring the main roads leading to Llanelwedd. Motorists will see bales labelled with these stickers in the fields as they head to the showground.

“It’s fantastic to see so many farmers giving the campaign their stamp of approval and joining forces with us to get the message out there. It is that ownership and sense of pride that is making this campaign a real success story.”

NFU Cymru will also use the show to launch a buyers guide that encourages shoppers to look closer at what they are buying and to consider the product’s origin.

“We hope that consumers will take this handy new buyers guide with them when they go shopping and take its values on board when making their purchases.”

NFU Cymru is encouraging the general public to engage in the “It’s Time to Back Welsh Farming” campaign by submitting images of any branded bales they spot while travelling through Wales.

Consumers are also encouraged to tweet photos of good and bad practice when it comes to the labelling of Welsh produce – tweet @NFUCymru and use the #BackWelshFarming hashtag.