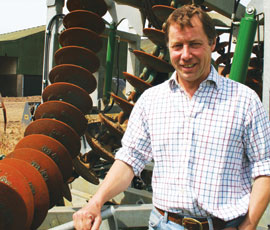 Cultivation and crop establishment techniques used on the Tillage-Live host farm have changed a lot since the event was last held on the Lennoxlove Estate in 1998 – and things are still evolving today.  Peter Hill  reports.

One of the more unusual cultivation implements introduced to British farmers in recent times is set to make its mark on the south-east Scotland farm of the Tillage-Live host this year.

The primary role for the Australian-built Kelly Harrow – which links a series of cast discs to form a flexible cultivating chain – is to stir stubbles to get volunteers and grassweed seeds to chit.

Last year’s horribly wet autumn put paid to manager Keith Stuart’s plans to use it that way last year – but it did prove its versatility by doing a good job of working down land after ploughing.

“It’s a very simple, high-output tool that should last a few years and be relatively cheap to run,” he says. “We didn’t get to use it as intended last year; but at least it didn’t end up sitting idle and actually did a very good job after ploughing.”

Buying the 9m Kelly Harrow is the latest stage in an evolving approach to minimum tillage that aims to trim costs and tackle grassweeds across 760ha of land cropped by Hamilton Farming Enterprises at Haddington, East Lothian.

It is not perfect yet, Mr Stuart acknowledges, and maybe never will be. But he is confident the farm’s crop establishment technique is evolving in the right direction.

“Our main objectives now are to control grassweeds relying more on cultural methods, particularly for the sterile brome that is our biggest headache,” says Mr Stuart. “But I’m also keen to improve soil fertility by incorporating plenty of organic material such as green waste and mushroom compost, yard muck and chopped straw.”

Soils are variable on the estate, which stretches across East Lothian down the coast to North Berwick and across to the Lammermuir foothills, going from sand to the east through the Grade 3 clay loams that account for about 60% of the cropped area, to heavy clays 175m above sea level.

“It’s workable land; not the best, but not the worst either,” says Mr Stuart. “Yields are pretty good, averaging 9-10t/ha for wheat, 7.5-10t/ha for winter barley and 6-7t/ha for the spring barley.

Ploughing, then using a power harrow-seed drill combination, used to be the farm’s universal approach to getting crops in – as it still is on many properties in the area.

It’s an attractive approach to being able to work through difficult autumn weather and requires fewer day-to-day decisions than minimum tillage, Mr Stuart acknowledges. But it is also a relatively costly approach compared with techniques that work the ground more selectively, less frequently and at a faster rate.

In an effort to drive down establishment costs, Hamilton Farming Enterprises was an early convert to non-inversion minimum tillage.

“We’ve been using min-till for oilseed rape since the 1980s and introduced it for cereal crops in the mid-1990s,” Mr Stuart points out. “That was after trying direct drilling for five years to help rejuvenate land that was tired with poor soil structure and minimal worm activity.

“It worked a treat in dry conditions and was fine three years out the five,” he adds. “But the other two were difficult and we steered away from the technique when we got into difficulty with grassweeds.”

Switching to a minimum tillage regime has helped, but rotational ploughing one year in five is now on the agenda to keep the problem in check.

“We have to look to cultural methods of control rather than relying on chemistry; ploughing for spring barley after two wheats will break the grassweed cycle,” says Mr Stuart. “I’m confident it won’t set back the improvements we’ve seen in soil structure.”

A Horsch FG tine cultivator and Simba single press work in combination to break stubbles after the combine, with a McConnel Shakaerator loosening soil at depth where required.

While the FG cultivator does a good job working the top 3-4in of soil, Mr Stuart believes this is still a touch too deep, with volunteers and weed seeds being buried rather than kept on the surface in a tilth encouraging them to chit.

“Also, there’s a relatively tight window for getting this process under way so we can spray off the green flush before sowing,” he adds. “We’re always looking at ways of covering the ground quicker and doing a better job.” That is where the Kelly Harrow comes in.