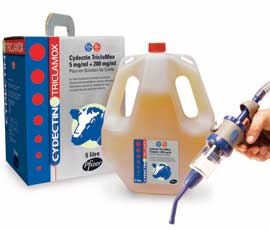 Cydectin TriclaMox Pour-On from Pfizer Animal Health contains a broad-spectrum wormer – moxidectin – with high potency against stomach worm and lungworm, and triclabendazole, the flukicide active against the widest range of fluke maturity

Treatment is administered along the top line between withers and tail head at 1ml/10kg dose rate. Meat withdrawal is 143 days and the product is licensed for use in beef cattle, suckler cows (including pregnant and lactating) and non-pregnant dairy heifers. It is not licensed for lactating or pregnant dairy cows or heifers.

The widespread high rainfall in April, June and July could make this a particularly bad year for liver fluke, according to Pfizer vet Dave Armstrong. “Wet conditions are ideal for the fluke life cycle,” he says. “Beef cattle with fluke can take up to 80 days longer than uninfected ones to reach finished weight. It may also impair fertility in breeding stock and make animals more susceptible to sudden death through clostridial diseases.”

Last year throughout Great Britain, 22% of cattle livers were rejected due to fluke infection, according to EBLEX regional manager Phil Hadley. Dr Hadley encourages farmers to seek abattoir feedback on the levels of fluke infection found in slaughtered cattle.

In addition, Mr Armstrong advises farmers to work with their vet or animal medicine SQP to do faecal egg counts and blood tests. Aided by wet ground conditions, he says liver fluke may spread this year into previously low-risk areas, so even if abattoir feedback indicates low or no previous history of fluke, it is important to remain vigilant.

When choosing a treatment, Pfizer’s first recommendation is to use a stand-alone flukicide, unless it is known that treatment for roundworms is also required. The second is to select a flukicide carefully in conjunction with good advice from an animal health professional, because not all treatments are effective against the same range of life cycle stages.

If autumn treatment for both fluke and worms is required, Pfizer recommends Cydectin TriclaMox Pour-On at or soon after housing, when the flukicide component’s action against immature fluke will reduce the need for retreatment later in the winter or the following spring.

Find out more about Livestock 2012