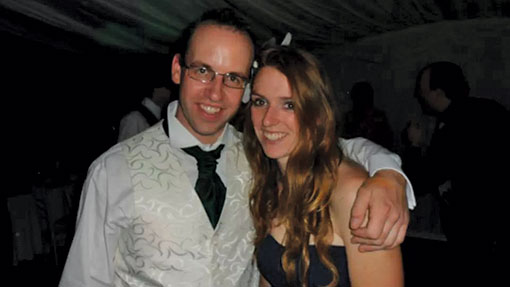 One young farmer has described how he popped the question to his girlfriend while strutting his stuff on a dance floor in Blackpool.

Service engineer Colin made the life-changing decision just as Radio One DJ Scott Mills took to the decks on the Sunday evening to play Killers’ tune Mr Brightside.

Colin, 25, said: “We were towards the edge of the dance floor because Amy’s injured her knee and Mr Brightside was playing so it just seemed the right time to ask her. That song is always played at young farmers parties.”

Amy, 25, a dressage rider and instructor, and Colin, who works for Southern Harvesters, are from Andover, Hampshire.

The pair are members of Stockbridge YFC and met at a Hampshire county dance three-and-a-half years ago. Amy had moved to Hampshire from Shropshire and joined the Young Farmers’ Club to meet new people.

The couple were introduced to each other by mutual friend, Kelly Stroud.

“Kelly was one of the first people we told,” said Amy.

Colin said he had considered a romantic stroll along the beach, but decided partying on the dancefloor was much more appropriate.

Amy said the proposal was a complete surprise: “I looked at him in shock and thought, ‘Did he just ask what I think he asked?’ Then I realised, ‘No, he’s actually being serious’”.

Although Colin did not having a ring for the big moment, Amy said it wasn’t a problem as she’d never worn one and wouldn’t have a clue what she’d like herself.

The pair plan to wait a couple of years and buy a house before getting married with the distinct possibility of having Mr Brightside for their first dance and Blackpool for their honeymoon.