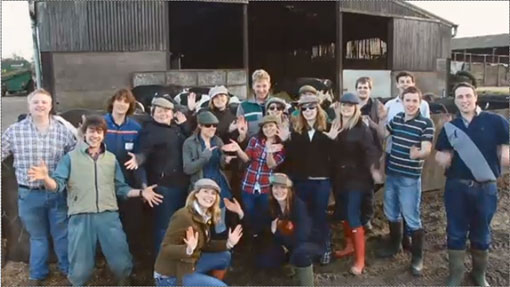 Young farmers from Abingdon YFC will be showcasing their musical talents on this week’s Let Me Entertain You.

The club has put together a music video featuring them dancing on a dairy farm and lip-synching to Swedish DJ duo Icona Pop’s 2012 breakthrough hit I Love It.

The show, which will go out on ITV1 at 6pm tonight (3 May), will pitch Abingdon YFC’s performance against a cheerleading club dancing to the same song.

Abingdon YFC has urged farmers to make sure they watch the programme and vote.

The club was paid £200 for producing the video, money they have put to good use by donating to their chosen charity, Oxfordshire Sands, which supports anyone affected by the death of a baby and promotes research to reduce the loss of babies’ lives.

But Abingdon’s musical skills are not confined to dancing – they are also through to the national finals of the choir competition at the annual convention.