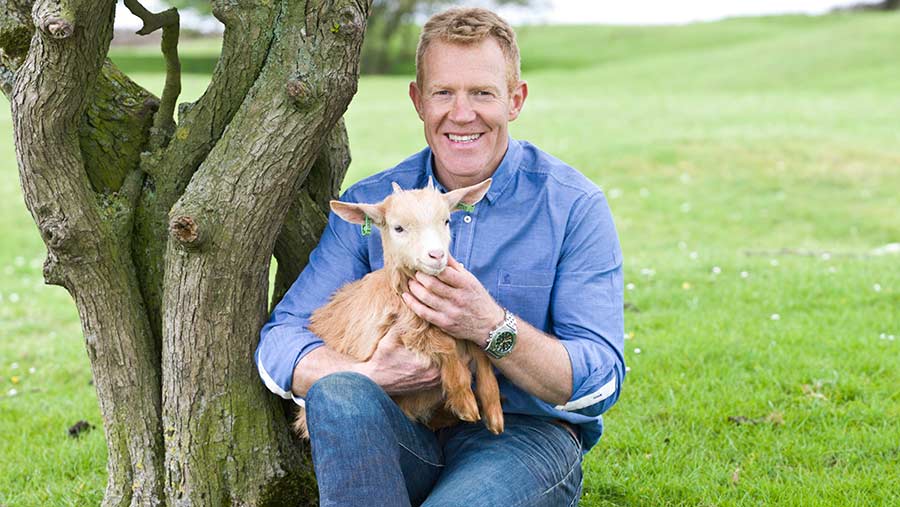 Adam Henson is a popular figure in the countryside. We find out what makes the farmer and Countryfile presenter tick.

What are the three most important traits you need to be a good farmer?

I always say that farmers need to be passionate about their career, hard-working, entrepreneurial, innovative, technological and business-minded.

If you are not all of those things, then you need to surround yourself with people who can complement your own skills. There are so many skills required that it can’t be narrowed down to three!

How did you get involved with Countryfile?

Countryfile advertised on the programme for a new presenter and I applied (along with 3,500 others), sending in a two-minute video explaining why I wanted to be part of the programme.

This was back in 2001. At the time, I hadn’t considered a job in television but my partner, Charlie, is a TV producer and encouraged me to apply. I was surprised and delighted to get the job, and now thoroughly enjoy presenting on the varied and fascinating farming stories across the UK.

Agriculture is becoming much better at communicating with the public and conveying the image of a professional, progressive industry.

The 7 million viewers who regularly watch Countryfile are a sure sign that people are now engaged in food production and the countryside. I am delighted to play a small part in telling the farming story.

Tell us about your family’s thespian connections

My grandfather was a man called Leslie Henson. He was a very famous West End comedian and theatre actor, with friends such as Ginger Rogers and Fred Astaire.

Leslie helped found ENSA, which entertained the troops during the war. His second son, Nicky Henson, is a well-known actor who has appeared on the stage, screen and television.

My dad also appeared on television in a programme called In the Country alongside Angela Rippon and Phil Drabble. I suppose performing is in my DNA.

What’s this about you and the Mel Gibson movie Braveheart?

Directors for films and dramas not only want the right costumes and backgrounds to fit the period, but also the right livestock, too.

This gave us an opportunity, with all our rare breeds, to provide animals for various productions. The producers of Braveheart contacted us, requesting the use of our pair of Longhorn oxen, to tow a cart carrying William Wallace’s father’s body back from the battlefield.

A college mate and I travelled to Fort William in Scotland and worked alongside the actors to help handle the oxen and therefore appeared in the movie. This is my claim to fame: being directed by Mel Gibson.

Most vivid memory of Seale-Hayne, where you studied?

I studied at Seale-Hayne for three years and had a fantastic time, making many lifelong friends. The best memory I have is of Graduation Day, when we celebrated getting our qualification and had our photograph taken in the iconic quad, which I had crossed so many times travelling to and from lectures – and occasionally the bar.

What did you learn from working abroad after college?

It was fascinating to travel to Australia and New Zealand, to learn about different farming systems. Australia taught me so much about farming on a large scale in remote areas, and how to make the most of the resources available. New Zealand taught me about efficiency and how to be forward-thinking.

Favourite job on the farm?

I always enjoy seeing new life coming into the world, so when any animal is giving birth it is always a delight to be present and be there to assist if required.

Why did you decide to write your memoirs?

I was always telling my dad, Joe Henson, that he should write a book about his amazing childhood and life in farming and rare-breed conservation. Ebury Publishing then suggested that we told the story not only of my dad’s childhood and life, but also about mine and the way our lives have followed very similar paths.

Any advice for other farmers wanting to write theirs?

I am very fortunate to have had such a diverse life, which people are interested in reading about – helped by the fact that I am on television.

The general public are very keen to learn about the countryside and food and farming, so there are now quite a few successful books hitting the shelves telling the story of farming life.

Be warned, though: writing a book is no easy task and can take up many hours of research, writing and alterations. Of course, it is always a good idea to find a publisher who is willing to take the book on before you begin, unless the aim is to tell your story to close friends and for future generations of your family.

Not taking studying seriously at school. I wish I had worked harder for my A levels, rather than having to do retakes.

Moving forward, we must ensure that those who represent British farming and landscape management lobby government to create clear, achievable policies and that agriculture and conservation are recognised as an essential part of the British economy and culture.