Countryfile presenter Adam Henson doesn’t simply like dogs – he adores them. So much so, in fact, he’s written a book about them.

He talks to Farmers Weekly about his enduring passion for our canine companions and his life as one of Britain’s most recognisable farmers.

It was during a visit to Norfolk that Adam Henson fell in love with Hungarian wirehaired vizslas.

He was filming for the BBC show Countryfile and chatting to a gamekeeper about which breed of dog to get next. He faced a dilemma. 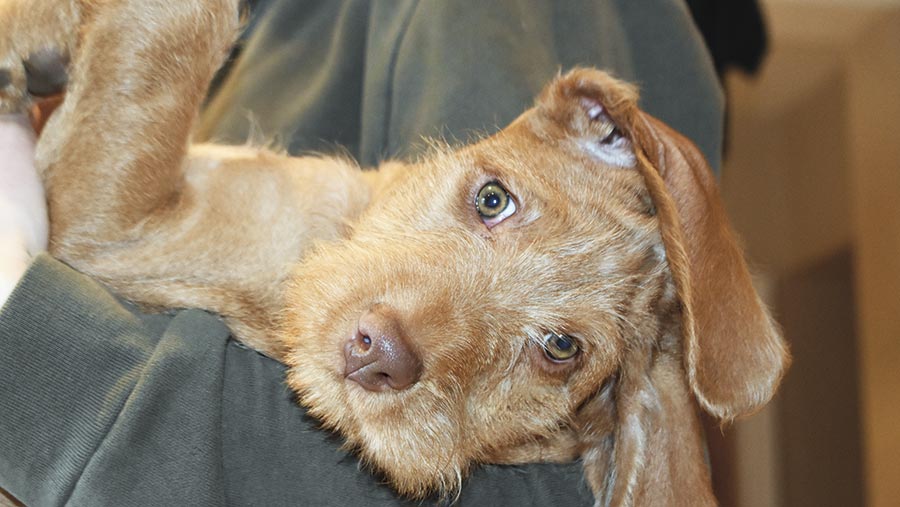 He wanted one that was good with the family, would be easily trained, a good gun dog, a guard dog and robust enough to cope with the everyday rough-and-tumble of farm life.

She introduced him to hers and, although he’d never previously encountered the breed, it was immediately apparent they would be perfect.

“Friends later joked that I chose a vizsla to match my hair colour, but the main attraction was that they had the right combination of attributes,” Adam says. “They’re amazing.”

He’s now owned three – Dolly and his current duo, Boo and Olive. He reckons he can’t imagine life at his Gloucestershire home without one of these animals, nicknamed “the Velcro dog” because they show such loyalty to their owners and stick to their sides.

“They also have a good bark on them, so if someone comes to the door, they’ll let you know.”

It’s soon apparent, when you meet the 51-year-old, that his life has been shaped by his canine companions – both as pets and as working animals.

“If I go into a room where there’s a dog, it’ll always come and sit near me. Although maybe that’s because I smell like a farmer.

“The bond I have my with border collie, Peg, is priceless,” he says. “She gives me a wonderful devotion and loyalty that is a real privilege – as well as making an enormous contribution to my farming life.”

Adam recalls first encountering – and being hugely impressed by – kelpies when he went travelling in Canada, Australia and New Zealand in 1988.

“When I came home,” he says, “I wanted three things – a quad bike, a mobile sheep-handling system and a kelpie.”

He still remembers with great affection his first dog, a spaniel called Nita – “she was my best mate, bonkers but incredibly loyal” – and how losing her affected him. “It was absolutely heartbreaking. I’m a farmer so I regularly see things die, but losing a dog is like losing a great friend.”

Even though Adam’s own kids are older now – Ella is 19, Alfie is 15 – he’s always been convinced it’s good for children to grow up around dogs.

“It teaches them responsibility, about the birds and the bees and, ultimately, about death, loss and the grieving process.” 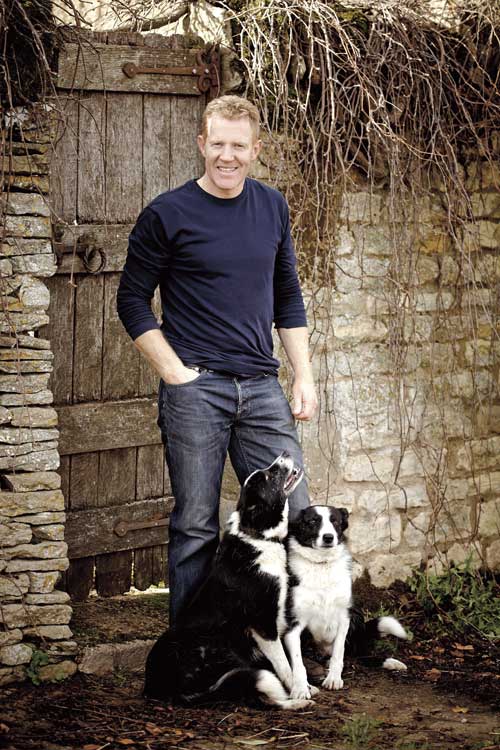 Having encountered so many different dogs over the years – whether it was the Labs of his early childhood that were “a Henson family institution”, working and assistance dogs, guard, search-and-rescue and sniffer dogs, he decided to chronicle this passion in A Farmer and His Dog.

Taking pride of place on the cover of this newly published book is Peg. “Collies,” he reckons, “are the most intelligent dogs on the planet.

You have to stimulate their brain and keep them active. They’re wired to work so they’ll chase anything that moves – whether that’s the wheels of a postman’s van, a cyclist or the water coming out of a hosepipe.”

Adam has previously had two books published (a fact he says his English teacher would be “amazed” to hear) – Adam’s Farm: My Life on the Land and Like Farmer Like Son.

The latter was an account of his relationship with his father and “hero” Joe, a hugely respected farmer, who took on the tenancy of Bemborough Farm in 1962 when he was just 30 and who founded the Rare Breeds Survival Trust in 1973.  “On my dad’s deathbed, I promised him I’d continue his work,” Adam says.

“Giving my dad and his business partner the confidence to let me succeed them in the business is one of my biggest personal achievements.”

It was 1999 when Adam took over the tenancy and Duncan Andrews, his old pal from Seale-Hayne College who he’d been travelling with, joined him as his business partner.

The pair now jointly run the Cotswold Farm Park along with a big farming operation.

The former is home to about 50 breeds and will attract about 140,000 visitors this year. It’s a big enterprise and, with about 13 full-time staff and 80 seasonal helpers, one the challenges Adam has faced is learning how to delegate. 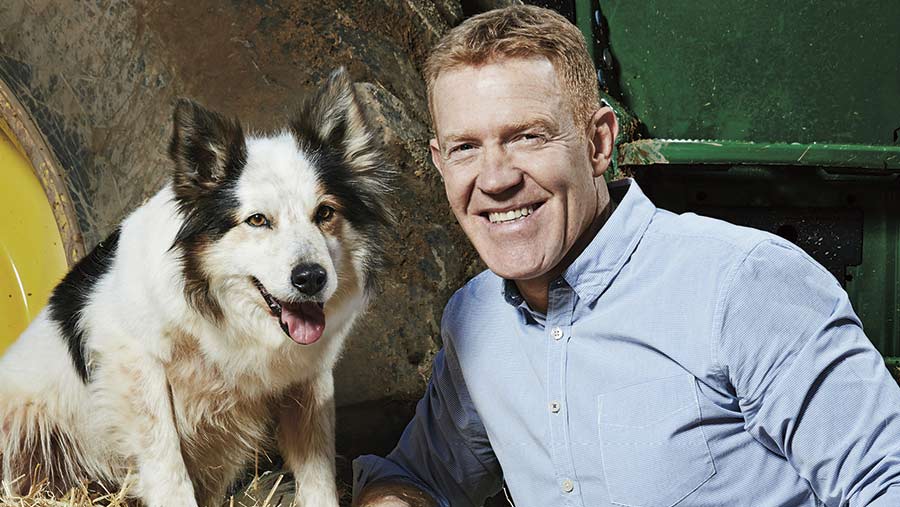 “As the business gets bigger, I struggle to keep a handle on everything that’s going on and, having run something yourself, it can be quite difficult to let go. You have to empower people and give them responsibility – it’s about trust. I‘ve surrounded myself with good people and rely hugely on my team.”

“Adam’s Farm”, meanwhile, has become a much-loved slot on Countryfile, giving viewers an insight into the challenges of running a mixed farm, in this show that has been known to get more than nine million viewers when it airs on Sunday evenings.

“I meet lots of people doing the programme – they might be progressive large-scale farmers or very innovative niche producers. It’s great for picking up new ideas. I love going to meet interesting farmers and I love TV, but I never set out to be on TV. I always wanted to be a farmer.”

His media journey started back in 2001 when his partner, Charlie, encouraged him to submit an audition tape and, despite his clip involving “a very irresponsible bull and a camera-shy chicken”, he was chosen from more than 3,500 applicants to be a Countryfile presenter.

Although a career in front of the camera was never an ambition when he was growing up, his family have strong thespian connections.

His dad presented a countryside TV show with Angela Rippon and Phil Drabble; his uncle appeared in Fawlty Towers and Inspector Morse; his grandfather was an actor and comedian with friends such as Ginger Rogers and Fred Astaire, and his grandmother was a chorusgirl and dancer.

“I’m no different to anybody else – so it’s weird being on the TV and in people’s living rooms on a Sunday night,” Adam says.

Ultimately, there’s nowhere he’d rather be than with his family or out on the land, shepherding with his collie or in his truck with his beloved vizslas.

Clearly, despite all his media success, this is one man who’s still very much a farmer at heart.

“The record is just under £15,000, but that’s exceptional with a good dog costing £2,000-£3,000. I wasn’t in the market at those kind of prices and, besides, I wanted a working dog to help on my farm, not a top trialling dog. Although that’s exactly what I now have in Peg…”

“I adore them but they are gluttonous and always thinking about their stomach. When I’m eating, I want a dog in its bed, not snuffling around you.”

“Kelpies look a bit like dingoes and lots of Australians believe they are descended from the ancient wild dogs that have lived on the Australian continent for at least 3,500 years.

“However, it’s actually more complicated than that. Kelpies are almost certainly descended from collies brought over by early settlers, but there is scientific evidence that dingoes interbred with them, probably way back in the early nineteenth century when Australia was newly colonised.

“The interbreeding may have been accidental at first, but seeing the result, some shepherds and farmers probably deliberately bred dingo into the mix.

“There is no real way of knowing because keeping dingoes or dingo cross dogs was illegal, so nobody ever owned up to doing it.

“When sheep were introduced to Australia, the dingo found them easy prey, and was, therefore, public enemy number one.

“There was a bounty for killing them, and a hefty fine for any farmer keeping a dingo cross. So naturally, farmers were deliberately vague about their dogs’ pedigree… #

Kelpies are great yard dogs, handling huge mobs of sheep (the Australians talk about “mobs” not flocks, and, with the numbers they handle, it’s a good word)…”

“The name ‘collie’ for a sheepdog can probably be traced back to the same root as ‘coal’ or ‘collier’, because they were originally black, or predominantly black.”

“We filmed Dick putting me through my paces with Peg. He told me off for gesticulating so much: sheepdogs should not be looking at the shepherd, but using their ear to hear the commands.

“So me flapping my arms about was at best pointless and, at worst, a distraction. I’m a person who naturally uses my arms when I am talking and I have also been taught to use my arms to give commands to gundogs.

“So it went against nature for me to stick my hands in my pockets while controlling Peg, but that’s what Dick made me do…”

“I soon realised that, as a breed, they’re far more sensitive than the collies and spaniels I had previously trained, and that the main ingredient needed for their training is love, not discipline.”

What are the most important traits you need to be a good farmer?

Farmers need to be passionate about their career, hardworking, entrepreneurial, innovative, technological and business-minded.

Not taking studying seriously at school. I wish I had worked harder for my A-levels, rather than having to do retakes.

Favourite job on the farm?

I always enjoy seeing new life coming into the world, so when any animal is giving birth it is always a delight to be present and assist if required.