UK farmers have been kept busy working their way through the first significant snowfall of 2018 – but they’ve still managed to share some impressive scenes online.

Scotland saw the heaviest snowfall, with 8cm reported in Tulloch Bridge on Tuesday (16 January) and temperatures dropping to 0C overnight.

Drivers experienced travel delays and disruption, mountain rescue teams were drafted in to check on people stuck in their vehicles, and schools across the country were closed.

The Met Office has issued an amber weather warning for Scotland to expect a spell of persistent and heavy snow overnight tonight, travel delays and power cuts.

But farmers don’t get a day off for such a trifling matter, and instead took to Twitter to post their best snaps of getting on with the job.

Prolific Twitterati Amanda Owen has posted a wide range of stunning shots of farm and family life in the Yorkshire Dales on her Twitter page. These pictures were taken yesterday afternoon as she brought the moor sheep down and into the land where there was less chance of them being overblown. Looks like a lively bunch. 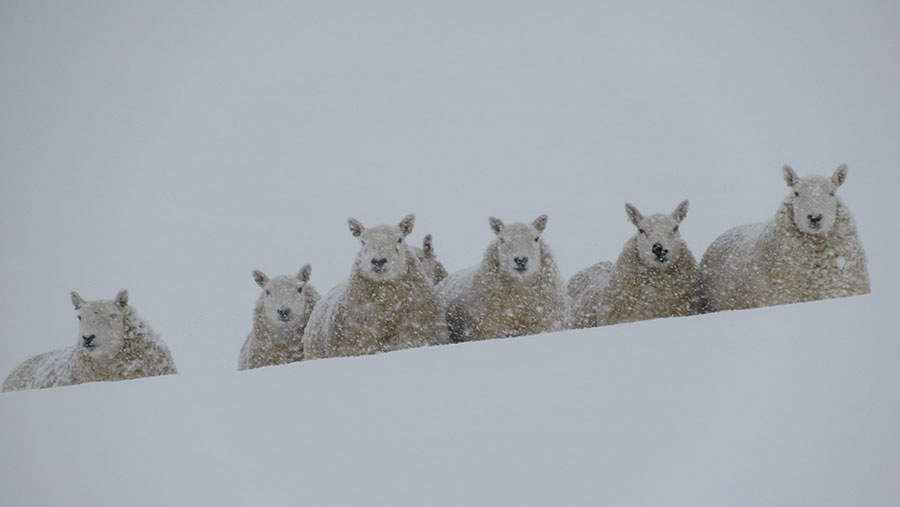 Lorraine Luescher farms at Megdale, Westerkirk, in the hills between Langholm and Eskdalemuir. She said yesterday was a “complete white out” and showed how precarious and vulnerable hill farming can be.

A farmer on his Ford 6810 #tractor goes about his buisness through the #snow covered roads of scenic Co.Fermanagh. The #weather warning is set to last until Saturday evening. @bbcweather @angie_weather @FermanaghW @fermanaghlakes @TourismIreland . pic.twitter.com/UVVQf7pSJD

This stylish shot from photographer John McVitty shows a farmer on his Ford 6810 tractor as he goes about his business through the snow-covered roads of scenic County Fermanagh. Beautiful.

A Rothiemurchus repost captures a Highland cow enjoying a cool morning – what a stylish bedhead.

5. Time for a thick fleece…

Even the Highland Folk Museum is getting in on the fun – and they have some pretty photogenic sheep on their hands. Don’t forget to put your thickest fleece on when the temperature drops…

Making tracks. A Muker hill farmer heads for home in the snow storm after the morning delivery of hay. @StormHour #Swaledale #YorkshireDales pic.twitter.com/9ZtfQjiJHU

The Old School Muker team shared this bleak picture, showing how a farmer’s chores are never forgotten. A Muker hill farmer heads for home in the snow storm after the morning hay delivery.

7. Swales in the snow

Some Swales in the snow ❄️ pic.twitter.com/99fEc9WJsM

Farmer’s daughter Hannah Binns snapped a shot of this flock in Lancashire, taking in their new winter wonderland this morning. Think they’re impressed?

8. Posing for the camera

Cattle and Lleyn sheep farmer Jonathan captured this stunning vista in Kinross today. The work may be harder in deep snow but it’s also more beautiful.

This video of the “ladies” gratefully receiving haylage is a fun insight into Joyce’s hill farming on the north coast of Sutherland. There’s always one who comes charging in from the back.