James Fairlie is dramatically enhancing the family farm with new projects after successfully managing the transition of the business to the next generation.

James worked in Australia after graduation before returning to the home farm. He has since expanded the business to include an anaerobic digester and contract farms a neighbouring 570ha, too.

See also: Read about all the Young Farmer of the Year 2017 finalists 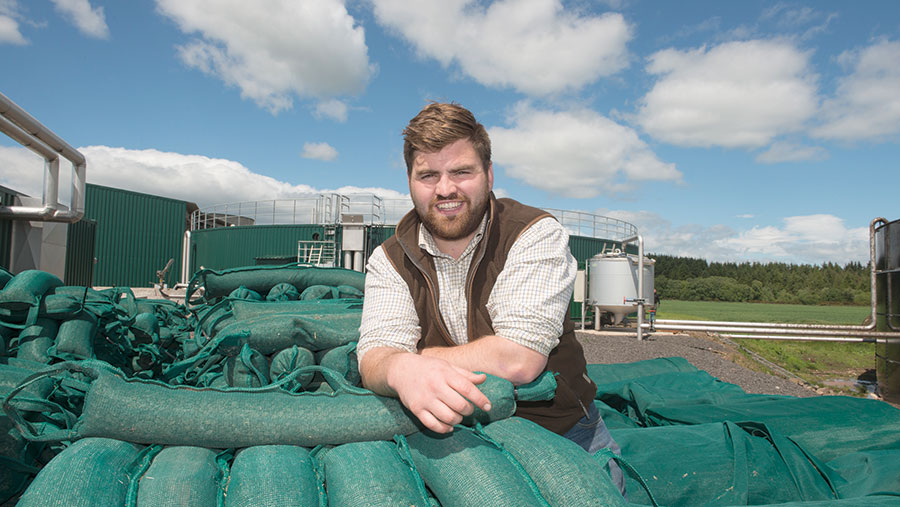 “My father Ian and his brother David used to farm together as a partnership until August 2013,” he explains. “They decided to split the business to help the younger generation of the family take it in the direction they wanted to go.”

Realising an anaerobic digester would fit well with the existing arable enterprises, the plant was commissioned last year. It produces 500kW of electricity for the national grid.

Local land prices of up to £20,000/acre mean limited opportunities for expansion. “Competing with big farms for land is challenging,” says James.

“I also did not see the point in spending all that money on land when average returns wouldn’t even pay the interest.”

Anaerobic digestion has proved a lucrative way of increasing returns without expanding the farm.

While commissioning the plant, James was approached by a neighbour who asked if he would be interested in contract farming some 570ha of nearby land.

Once struggling due to poor commodity prices, the family farm is now thriving. “Opportunities like this are one in a million in our area,” says James.

“It is as if our hard work and dedication to doing as good a job as we can is being noticed and appreciated.”

Young Farmer of the Year 2017 is sponsored by Co-op