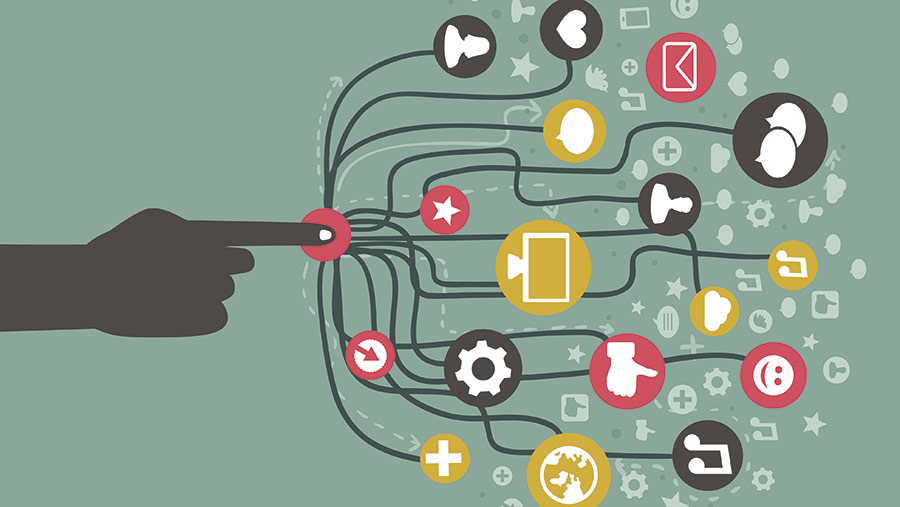 Six years after its first meeting, #clubhectare is relaunching as a fully fledged membership organisation.

We find out how they began and what their vision for the future looks like.

When Lincolnshire farmer Chris Hewis used social media to ask if anyone fancied meeting up for a bite to eat, he was unsure what response he would get.

But he soon found himself sharing a pub meal with 13 other farmers at the Habrough Hotel, near Immingham.

“Getting people together is my key thing,” says Mr Hewis, who manages a beef and arable enterprise. “There are far fewer people working on farms these days, which means people don’t meet up so often and we’re in danger of losing our sense of community.”

Six years after that first “tweet meet”, the hotel has closed down. But the group of farmers who met there has gone from strength to strength.

Deciding they needed a name – or hashtag in Twitter-speak – #clubhectare was born. Today, the group has hundreds of members.

Alongside farmers, there are also agronomists, accountants, solicitors, farm suppliers and agricultural bankers.

Online discussion focuses around all things farming related – while the group continues to meet up socially offline.

A vibrant under-30s section serves the interests of younger farmers – discussing career pathways and ways of forging a future in farming.

East Yorkshire farmer and #clubhectare co-founder Jono Dixon was among those at that first meeting.

Last week, he and Mr Hewis helped relaunch the club as a fully-fledged membership organisation at the Midlands Machinery Show, Nottinghamshire.

“I am very proud of what we have achieved with #clubhectare over the past six years, but I am more excited about where this club can go in the future,” he says.

“With a great team behind us, there is no limit to what we can do.”

The aim remains the same: a members’ organisation dedicated to promoting agriculture and food production while forging business and social links between members and the wider community.

But rather than an ad hoc group, it is now doing so with more direction and more perks (see #clubhectare relaunch).

The goal is to sign up 500 members by February. That target already looks as if it will be met, with 248 signed up already.

Membership is free and allows people to become involved in online discussion as well as attending social events.

As well as creating an online community, though, #clubhectare has campaigned on a range of issues. They include calls to ban sky lanterns, the return of stubble burning to control blackgrass, and the relicensing of glyphosate.

It has also acted as a way of getting farming’s message across to the wider non-farming public – building bridges with consumers and shoppers who want to learn more about agriculture and where their food comes from.

The wider industry is showing its support too. The relaunch of the group, which includes the new forums and website – is being supported by six key sponsors, including sprayer suppliers, machinery manufacturers and equipment companies as well as Farmers Weekly.

Its reach continues to widen. From its humble roots, the hashtag “#clubhectare” is used on social media on average 30 times per hour.

Edwina Mullins, who manages #clubhectare’s social media and website content says: “Different social media platforms reach different people, and it’s important to try and reach and connect as many people within the industry as possible.”

“People rarely stand around in the yard chatting before work and putting the world to rights,” he says. “What we’re doing is providing that community online.

“The key to #clubhectare is a great balance of online content and real world events that are fun, but add value to the farming workforce.

“We are a club started by farmers, for farmers, and this relaunch of the club will see an offer to its members that isn’t seen anywhere else.”

Vision to connect farmers across the nation

Machinery dealer Gordon Cummings was instrumental in relaunching #clubhectare as a members’ organisation that is “exclusive but also inclusive”.

“We welcome anyone who, like us, has a passion and interest in the rural way of life,” says Mr Cummings. “#clubhectare is sticking with its roots – of connecting farmers across the nation. But now, it is so much more.”

Now with a committee, constitution and member benefits, the vision for #clubhectare is to be an online meeting place for the professional exchange of thoughts and ideas – not just about farming, but covering the wider countryside too, he explains.

Discussions will take place online via a purpose-built forum and through regional events which are relevant to farm businesses.

The forum is for members, with participants using their real names to ensure transparency and “real, honest constructive discussion”.

Meeting up in person will remain at the heart of #clubhectare – not just to network but to socialise too. National and regional co-ordinators are already organising events.

Members will also get special discounts when they join, including money off business items, says Mr Cummings.

“#clubhectare will continue to promote UK farming and will campaign where necessary to ensure the industry of food and farming has the voice it deserves.

Finally, and most importantly, it will strive to promote social links between its members and the wider community.”

Sian Rowlands is #clubhectare’s representative for north Wales and Shropshire. Based at Oswestry, her day job is as a co-ordinator for Wynnstay’s dairy technical services team.

A member of the #clubhectare under-30s group, she got involved as an undergraduate at Harper Adams and then Cirencester when #clubhectare first started. Joining proved to be a great way of finding out about jobs and work placements, she explains.

“I was doing a degree in farm management and it was great to be able to get advice, find out out the issues affecting farmers and what is happening. Now I feel I am in a professional position myself, I hope I can do the same for others.”

Having a community to bounce ideas off is tremendously beneficial, says Ms Rowland. “When I first moved to Oswestry, it was a great way of finding people with similar interests. It also puts you in contact with people you wouldn’t necessarily meet in everyday life.”

Trainee arable manager and sprayer operator Iain Robertson got involved with #clubhectare after finding himself off work for six months with a broken knee.

“It kept me in touch with the wider world,” he says. “It’s a great way of staying in contact with people and accessing top-notch information. They used to talk about six degrees of separation but I think these days with social media it is down to two or three.”

Sitting in a tractor cab all day can be isolating, says Mr Robertson, who works for David Foot Ltd – a 2,200ha mixed farm near Dorchester, Dorset. But social media brings can help people together as a community, he adds.

#Clubhectare has proved to be useful source of advice, whether for agronomy, agricultural machinery, farm management or general day-to-day farming. “It’s a great tool professionally – and it can be great fun too,” says Mr Robertson. “It also kept me sane while I was off work.”