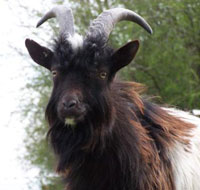 A new rare breeds centre is being created in North Wales as part of a £1.8m education and animal conservation project.

The unit at Deeside College will first be used to provide a “real” working environment for animal care students.

College heads hope the centre will eventually play a role in the conservation and breeding of threatened species.

Facilities will include isolation pens and classrooms in a refurbished wooden building on the site.

The emphasis will be on Welsh farm animals and increasing the population of rare breeds such as Bagot goats and Iron Age Pigs.

Other less threatened species, such as Hill Radnor sheep, Balwen Welsh Mountain sheep and Welsh pigs, will also be kept because of their relevance to Wales.

Larger animals will include Dexter cattle and a section for poultry and wildfowl.

Head of faculty Vivienne Martin said: “It will be a wonderful opportunity for our students to support conservation and learn more about the sustainability aspects of animal care.”

Work on the three-acre Northop site, which will have access to woodlands for pigs, is expected finish in the summer in time for the September intake of students.

Since then, student applications have soared 20% and college bosses are also looking to boost their land-based provision.