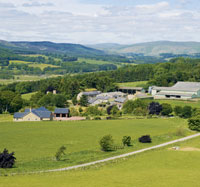 Somerset County Council has raised almost £10m from the sale of some of its farms, property and land.

The council, amid strong opposition, announced last year that it planned to sell 35 of its 62 farms in a bid to reduce the county’s £350m debt. Of the 18 which had now been sold, two had been bought by existing tenants, and the majority would remain as farms, said council leader Ken Maddock.

In total, the sales have raised £9.6m which will go towards capital projects, such as major building works, or plans like making super fast broadband available to every household over the next few years.

“This is great news for everyone in Somerset,” said councillor Maddock. “The farms were heavily subsidised and only helped a few people. Projects like superfast broadband will benefit everyone in the county, businesses and residents. It is a far more fair way of spending our money.”

David Huxtable, cabinet member for resources, said he was delighted to have secured such good prices in a difficult marketplace. “There is more to come as we work with other councils to look to share buildings so we can free up more properties which we can sell off.”

However, Jeremy Walker, chairman of the Tenant Farmers Association, said he was desperate for the council to retain as many farms as possible. “We have always said it was a knee-jerk reaction for short-term gain. We are glad to hear that some farms are staying in agriculture, but are disappointed that tenants will be denied the opportunity to get a vital first step on to the farming ladder.”