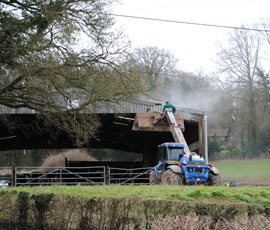 A farmer who cheated death after he plunged 10ft on to a concrete floor while repairing a barn roof believes more must be done to prevent falls from height.

Last week Farmers Weekly reported how a Hampshire farm manager was fined when a passer-by photographed him lifting two workers in a grain bucket on a telehandler up to a barn roof.

Our story sparked lively debate on FWi, Twitter and Facebook. Some farmers were furious that a member of the public had effectively got Alton farm manager Peter Kirby into trouble by tipping off the Health and Safety Executive (HSE).

But others, including Badminton Estate tenant farmer David Russell, said Mr Kirby deserved to be punished for breaching health and safety laws.

Mr Russell, 63, narrowly escaped death after he fell out of a bucket and landed head first on concrete while fixing new guttering on a barn.

“Working from height is one of the most common causes of death or serious injury in agriculture, yet the mixed reaction to your story shows that not enough farmers are taking this seriously,” he said.

“I should have had a harness on, then I wouldn’t have fallen out of the bucket – but I did. I was a fool and it almost cost me my life.”

Mr Russell, of Didmarton, Gloucestershire, suffered a traumatic brain injury in the incident in December 2009.

He spent three months recovering in hospital and was unable to work for six months. He has recently been forced to retire from his full-time job as a farm machinery salesman two years early through ill health. 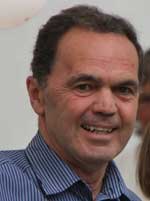 Familiarity breeds contempt, but if you can see the dangers, you can work around them and survive.
David Russell

Mr Russell has also developed post-trauma epilepsy brought on by the head injury and doctors have advised him not to drive.

“The accident turned my life upside down and it finished me off doing the job I loved – all for a few seconds,” he said.

“Agriculture is and always has been a dangerous occupation, but the worst thing is actually not seeing the dangers. Familiarity breeds contempt, but if you can see the dangers, you can work around them and survive.

“By and large, accidents resulting in serious injury or death are preventable. I wish I could turn the clock back, but I can’t.”

Mr Russell said the dangers when working from height were obvious and there was “no excuse” for managers to risk the lives of their workers by failing to follow guidance.

“Hiring a man platform costs a few hundred pounds, but it’s better than paying a large fine, or worse still, having a fatality on your hands,” he added.

“It’s disappointing that as an industry there are still people out there taking risks with their own lives and the lives of their workers,” said Mr Freestone, farm manager of Overbury Farms, an arable and sheep LEAF demonstration farm in Tewkesbury.

“Farming is statistically one of the most dangerous industries to work in. The legislation on health and safety is there for a reason. If taking safety precautions saves just one life, then it’s worth it.”

According to the HSE, falls from height are one of the biggest workplace killers, accounting for about 35 deaths each year. Farming, forestry and horticulture employ about 1% of the national workforce, but account for about 13% of workplace fatal falls.