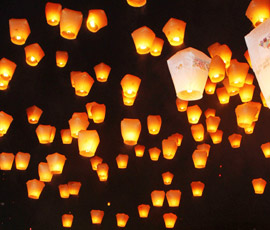 DEFRA has confirmed it is to investigate the level of risk Chinese lanterns pose to the environment, livestock and crops.

The farming industry are hoping the study could pave the way for a ban on the use of the lanterns which, it is argued, pose a threat to animal welfare and human safety.

Made from paper, wire and bamboo Chinese lanterns have become are a popular feature at social occasions. However, farmers have pointed out when they land on the ground the wire components can be ingested by livestock or chopped up during silaging to contaminate feedstocks.

Lanterns landing on crops in the dry summer months can start fires, as their cotton and paraffin fuel cells can smoulder long after the flame has gone out.

Former farm minister Jim Paice ruled out a ban when interviewed by Farmers Weekly last year. But the new team in office has given the go-ahead to an official investigation.

“Given the concerns and complaints that are being made about the damage sky lanterns can do, we want to find out just what effect they are having on farming and the environment.”
DEFRA spokesman

A DEFRA spokesman said the aim of the study would be to find out what kind of effect sky lanterns are having, as well as what other countries are doing to address concerns over their use.

The inquiry will also investigate the value of the market for sky lanterns in England and Wales.

The DEFRA spokesman added: “Given the concerns and complaints that are being made about the damage sky lanterns can do, we want to find out just what effect they are having on farming and the environment.”

The Women’s Food and Farming Union, which has been one of the groups calling for a ban, said they were delighted a study was to be conducted.

“Members first started campaigning for a ban on the lanterns three years ago and have continued to lobby to get an understanding of the danger which these sky lanterns can cause,” said a statement.

“We have evidence, pictures and postmortems to prove the danger of these lanterns. Once they are launched these lanterns can descend anywhere and have caused problems to people as well as fires in buildings .and causing disruptions near airports and a constant stream of postmortems on cattle that have eaten the wire which killed them.”