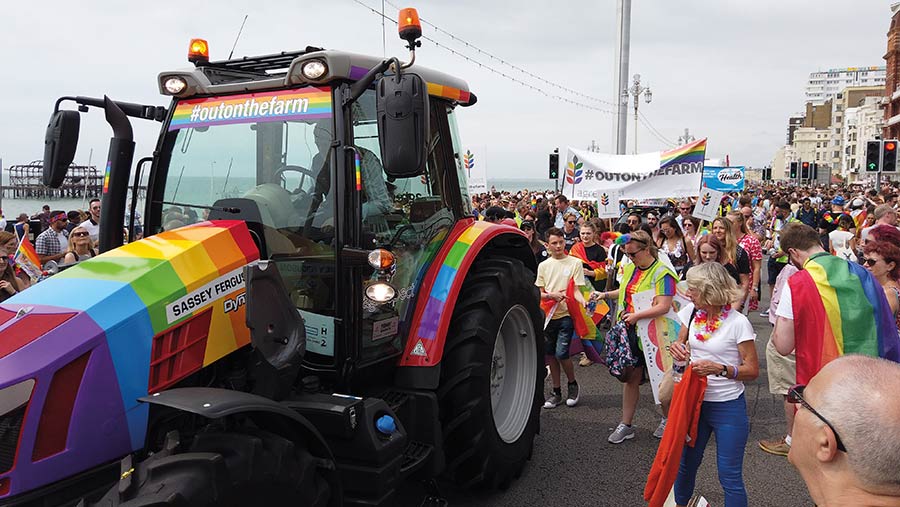 Design a bright and colourful tractor livery to showcase the diversity of British farming and you could be in with the chance of seeing your design brought to life.

The diversity and inclusion network Agrespect is teaming up with Massey Ferguson to take the farming message to this year’s Birmingham Pride.

They are inviting you to come up with a rainbow-inspired design for a Massey Ferguson 8S, which will act as a proud and positive vision of modern agriculture to a mostly urban crowd at the event.

See also: ‘It took me 15 years to come out – my fears were unfounded’

The winner will receive £250 worth of Massey Ferguson merchandise and get to see their multicoloured masterpiece emblazoned on the tractor at the parade, which takes place in the heart of Birmingham on 25 September.

What Pride means to farmers

Welsh borders farmer Ben Lewis said: “Travelling to Pride in Brighton from the family farm in mid-Wales was a big deal for me in 2019. I truly felt that being gay and being a farmer could never sit comfortably together.

“It changed my mindset of 36 years and has made such a difference to my everyday life. I would wholeheartedly encourage anyone who might even be considering it to go along and enjoy who they are and where they’re from.”

AHDB skills manager Amie Burke said: “Never in my life did I think I would see farmers heading to Birmingham Pride. For years I lived a double life; my job in agriculture and my personal life in Birmingham – I never imagined the two could merge like this.”

Jon, from the Forest of Dean, said: “I’m not from a farming background but working on a dairy farm has completely changed my life and given me confidence. I took part in my first Pride event back in 2019 because I wanted to represent LGBTQ people from farming communities.”

In the spirit of inclusivity, Agrespect would like to see entries from all age groups and is especially keen to see the arty ideas of young people that show their optimism for the future.

All of the entries will be on display our dedicated gallery.

See below for further details on how to enter the tractor livery design competition.

“We are delighted to be able to support Agrespect and are looking forward to the winning design giving the MF 8S tractor a dramatic makeover for the Birmingham Pride parade.

“It will be an eye-catching rural symbol showcasing agriculture in the centre of the city and a powerful salute to the importance of inclusivity and diversity in British farming.

“We’re looking for some really striking graphics to replace Massey Ferguson’s classic red paintwork for the day. Think rainbow colours and give them a farming twist.”

In 2019 Agrespect members and supporters – which included farmers, agricultural workers and industry representatives – received a rock-star reception at the Brighton Pride festival as they walked through the city centre behind a rainbow-coloured tractor.

In what was hailed as a historic and emotional breakthrough for the farming community, the group of about 50 and their “Sassy Ferguson” tractor drew cheers and applause from the half a million people watching the parade.

Representatives from the AHDB, the National Farmers Union, Rothamsted Research and Farmers Weekly joined the march through the city centre to support Agrespect’s positive message to rural and city folk alike.

Watch the video of Agrespect and partners participating in the event below.

After the coronavirus pandemic scuppered plans to attend the Edinburgh Pride event in 2020, the members and allies of the network will be heading to Birmingham’s festival to present farming as a diverse community and industry.

“Attending events like this shows the public an authentic and unexpected side to the farming industry. It also presents the British farming message to a new audience and is another way to connect society to the individuals who grow the nation’s food.

“This is all about the farming industry promoting diversity and inclusiveness in its broadest sense – whether that’s to do with sexuality, ethnicity, gender or anything else.

“It has never been more important for farming to attract new entrants, so the more welcoming we are to people from different backgrounds, the more talent we’re going to encourage to carve out a rewarding career in British agriculture.

“The Brighton Pride walk in 2019 was life-changing for the people who took part, and we hope to be able to provide that same life-changing experience for more and we’re looking forward to doing it again with the Agrespect community in Birmingham.

“We represent everyone in agriculture, so please get in touch via the brand’s website or social media if you’d like to celebrate your industry with us.”

It couldn’t be easier to get involved in the competition. You can download and print out a PDF of the tractor template on the Pride in Farming Tractor Design Competition page and colour it in.

Once you are happy with your rainbow-themed design, take a clear photo or scan it and upload it to the gallery on the competition page before the closing deadline of 20 August.

You will also find the competition’s full terms and conditions.

Agrespect is a network that promotes all forms of diversity, inclusion and equality in the countryside. The brand was formed to tackle rural stereotypes and encourage everyone, regardless of their gender, background, ethnicity or sexual orientation, to feel welcome in rural communities and to even consider a career in the sector.

Since 2018 Agrespect has been breaking down barriers by sharing experiences with the farming community, and is backed by major industry brands and bodies, including the NFU, the AHDB, Massey Ferguson, Defra, Harper Adams University, the National Federation of Young Farmers’ Clubs, British Sugar and Farmers Weekly.

Go to agrespect.com to find out more.