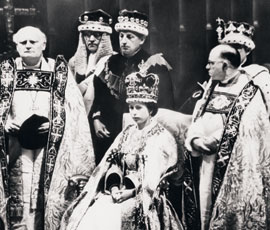 Farming was in transition as the Queen acceded in 1952. A new age of mechanisation was dawning as production recovered from the war years.

While the call for “Dig for Victory” encouraged food production on every spare inch of ground during the Second World War, even in 1952 – seven years after the war ended – food supplies were still tight as British farming remained under the watchful eye of the government.

1952:
Millable wheat and barley were both making about 30-33 shillings a hundredweight

In the 1952 Journal of the Ministry of Agriculture, an article begins: “The world food outlook is very grave indeed… a united effort on the part of scientists and farmers will be needed if the situation is to be saved.”

The government was still directing agricultural production based on the principles of producing food during the war, according to John Martin, lecturer in economic and social history at de Montfort University, Leicestershire.

1952:
General farm workers were being paid an average of 108 shillings a week

“There were rigid controls over the way farmers were allowed to operate, based on the government’s emphasis on increasing arable production and greater encouragement given to boosting output of milk, pigmeat and eggs. But farming was becoming more prosperous and livestock prices were relatively high,” says Mr Martin, author of the book The Development of Modern Agriculture.

Despite the government’s post-war target of improving food production by 20% by 1952 – and a raft of subsidy payments worth £40m a year to help finance infrastructure improvement and increase output from British farms – food shortages were still in place.

In fact, world food output was 10% below what it had been pre-war.While better utilisation of grass and less reliance on purchased feeds may appear to be a modern mantra, the same message was being given to farmers in 1952.

Increasing the value of grass as a conserved crop triggered the development of silage-making and in 1952 “ensilage” was being hailed as an opportunity that could avoid the pitfalls of making hay and provide farmers with the opportunity to produce a protein-rich fodder.

But the farming industry was still plagued by sporadic outbreaks of foot-and-mouth.

An investigation concluded that large populations of starlings that had migrated from Europe were present on infected British farms and were a likely cause of the spread of the disease.

Pictures from the past

1. The government pressed on with its bid to eradicate TB from cattle with a ruthlessly efficient effort. But it battled a sporadic foot-and-mouth outbreak with frustration as new cases popped up across the UK.
2. Foot-and-mouth spoiled the new Queen’s visit to the Royal Show in Devon with livestock classes banned.
3, 4 & 5. The drive to produce more food was evident everywhere in agriculture’s thirst for new kit. Aerial spraying, new combines and a booming Smithfield Show. 6. Silage making was gaining popularity in a bid to boost milk production.
7. A Farmers Weekly cover encapsulates the turning point in farming from manual into mechanisation. A new small baler takes centre stage, but ther are still seven workers employed to man it.
8. King George VI dies. In February, farm workers stood still and doffed caps to pay their respect along with millions across the Commonwealth.
9. A cold snap hit in April just as lambs were turned out.
10. The autumn was better and drilling went well.
11. A Ministry of Agriculture deal pledged £5 an acre if farmers ploughed up grassland and grew cereals instead.