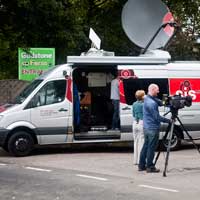 A Department of Health committee is considering a change to rules governing open farms in the wake of the E coli 0157 outbreak in England.

The committee will look at whether children under five should have contact with animals on petting farms, a Department of Health official said.

The number of cases linked to farms rose to 64 over the weekend and a fourth premises, World of Country Life, Exmouth, Devon, was also closed after possible links were found with three children who had the disease.

The Health Protection Agency said seven more people had been affected by the 0157 strain of the bacteria connected to Godstone Farm.

There are now nine children in hospital but all are said to be stable and improving, according to the HPA.

Meanwhile the results of an investigation on Godstone Farm, Surrey, are expected to be announced today (Monday 21 September).

Godstone Farm is at the centre of the outbreak and was the first farm to close on 12 September.

Its sister farm, Horton Park Children’s Farm in Epsom, also shut because of “unsatisfactory” hygiene arrangements but no cases of E coli 0157 have been linked to the Epsom site.

White Post Farm at Farnsfield, near Mansfield, Nottinghamshire, was the third farm to shut when two visitors fell ill with E coli.

“The risk of infection from E coli through petting farm animals can be prevented by following everyday good hand hygiene measures,” an HPA spokesman said.

“Ill health following a visit to an open farm is unusual even among children and these risks need to be balanced against the benefits for a child’s education and development that arise from contact with animals,” the spokesman added.