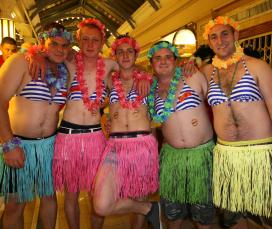 The Beatles, Lady Gaga, Abba and Michael Jackson were just some of the stars of the music world to make an appearance at the Young Farmers AGM in Blackpool on Saturday (7 May).

Thousands of young farmers donned costumes as part of the weekend’s festivities, which called on them to dress as a song title.

You can see all the photos from Saturday night, plus hundreds of photos from across the weekend, in our young farmers AGM picture galleries. If your face is circled in any of the snaps, you could be in with the chance of winning £50 – just go to our YFC AGM special page for all the details.

You will also find all the news from the weekend, plus videos and Tweets from the Farmers Weekly YFC AGM team.