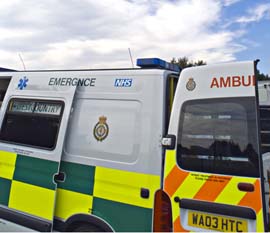 A farming company has been fined £20,000 after an accident in which an employee became entangled in machinery inside a grain reception pit.

Heavy rain at R Todd & Company’s Blacketyside Farm, Fife, had caused the pit to fill with about 12 inches of water.

Farmworker Peter Ednie was trying to empty the rainwater when his foot got caught in the unsheathed part of a screw auger inside the pit. Although it was switched off it had not been isolated from the power source.

Mr Ednie continued to pass buckets of water to a colleague when the auger was mistakenly turned on, trapping the employee’s right foot and resulting in an injury which later required two toes to be amputated.

An investigation by the Health and Safety Executive found there was no risk assessment in relation to any activity that required employees to work inside the grain reception pit.

A generic risk assessment document obtained during the HSE investigation stated that no unguarded machines should be cleaned unless they were switched off, but did not explain that power to the machinery must at all times be isolated.

It was also found that at no point during his employment had the worker been given the opportunity to read or consider this risk assessment.

After the hearing, HSE inspector Harry Bottesch said: “If the farm business had carried out a suitable and sufficient risk assessment and provided a safe system of work for the task of cleaning inside the grain reception pit, then this incident would not have happened.

“Power to the screw auger in the grain reception pit should have been isolated before an employee attempted to enter and clean it – it was not sufficient to simply turn the machinery off.”

At Kirkcaldy Sheriff Court the farm business was fined £20,000 after it pleaded guilty to breaching Section 2(1) of the Health and Safety at Work etc Act 1974.

Share your Health and Safety near-misses on our forums.