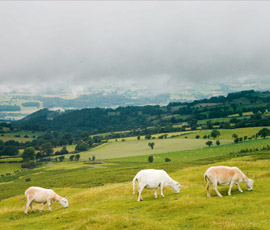 Total income from farming in Wales has risen by more than 30% over the last year, latest figures show.

The statistics revealed total income from farming rose by 31% to £209.5m in 2011. They also show the value of agricultural output produced in Wales in 2011 was around £1,393m, an increase of 12% on 2010 – generating a 25% increase in Gross Value Added (GVA) from agriculture. The rises are attributed to greater output and higher market prices as well as the effect of the exchange rate on the value of single payment scheme (SPS) payments to farmers.

Mr Jones said: “Against the backdrop of the very low incomes seen over most of the last decade, it is great news that the rewards for so much hard work, and producing food which is second to none, have grown.

“It should give confidence to the industry as a whole, and particularly our young people, that their passion, skills and hard work can bring rewards.

“It also highlights the importance of having a government which supports agriculture and recognises the major part agriculture has to play in Wales’ economy, in terms of directly supporting the wider community and providing primary produce for the food supply and processing chains.

“The multiplier effect of every pound generated by Welsh agriculture is immense.”

But Mr Jones also warned: “As with any industry, there are always concerns about what might be just around the corner, whether in the form of emerging diseases such as the Schmallenberg virus, the euro exchange rate or the impact of CAP reform.

“There is always room for improvement and more work to be done, but that should not be allowed to overshadow this positive news.”