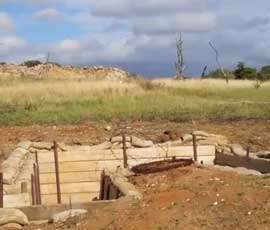 A Suffolk farmer who recreated a World War One battlefield on his farm saw it play a starring role in the blockbuster TV series Downton Abbey.

In one of Britain’s most unusual farm diversifications, Jeremy Hall painstakingly re-created two British and German style trenches in a field just outside Ipswich – according to the original designs.

Filmmakers were so impressed they used the farm as the location for the Somme battle scenes in the second series of Downton Abbey, currently being shown on Sunday evenings on ITV.

“It might look like the Somme, but it’s actually Suffolk,” Mr Hall told Farmers Weekly.  “What we’ve done is so realistic that some people who’ve come here find it rather disturbing, especially when it is dusk or after dark.”

In Downton Abbey, actor Dan Stevens plays Matthew Crawley, an army officer fighting on the front line. “The Suffolk landscape is not that dissimilar to some French landscapes,” he said. “We were in there, and it was very real and muddy.”

The trenches were built by Mr Hall after he was approached by military historian Taff Gillingham – one of the most sought-after advisors for films featuring the wars, battles and campaigns of the 20th century.

“Taff lives nearby and he was looking for somewhere to dig a trench,” says Mr Hall. “I’ve known him a few years. Until now, we’ve mainly done documentaries but Downton Abbey was our first big drama.”

Mr Gillingham is a stickler for detail. The German trenches – complete with machine gun post among the ruins – are dug deeper than the British and are situated, as they were in reality, on the high ground.

Past no-man’s land, the British side includes a section of front line with firebays, a regimental aid post for stretcher cases and a length of communication trench – all built using a JCB and the British Trench Building Manual of 1916.

Shell-shattered trees are dotted around the site. Nearby, a sunken lane could easily be mistaken for France or Flanders. Local councillors did a double-take when they received the planning application, says Mr Hall.

Neighbours have taken it in their stride. “We’ve never had any complaints but one chap phoned the police because he could hear machine gun fire – he said he knew it was a machine gun because he had fought in World War Two.”

As a diversification, a trench is a bit different to opening a farm shop, concedes Mr Hall. But it’s not a money spinner. “It depends who wants to film here. This year has been exceptional – last year we earned less than £200.”