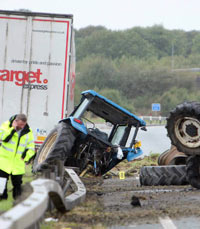 A North Wales farmer narrowly avoided death after his tractor was “annihilated” in a horrific smash with a lorry.

The farmer, who has not been named, escaped with a chest injury after an HGV lorry ploughed into his tractor, tearing it in half.

The lorry, which had been driving behind the tractor on the A55 near Junction 7at Gaerwen, Anglesey, ended up on an embankment, sustaining only minor injuries.

Police said emergency services rushed to the scene of the crash on Wednesday (23 September) morning to free the farmer, who is from Llanfaglan, outside Caernarfon.

He was taken by ambulance to Ysbyty Gwynedd in Bangor where his condition is stable.

A witness said it was a “miracle” that the farmer survived.

“The tractor was annihilated and the only way he may have escaped alive was that the cab was detached and thrown away from the carnage,” he told the Daily Post.

Another witness said it appeared the lorry had gone straight into the back of the tractor, flipping it over.

A spokeswoman for the North Wales Fire Service said the road was closed for six hours while a crew staged a clean-up operation to clear spilt diesel from the carriageway.