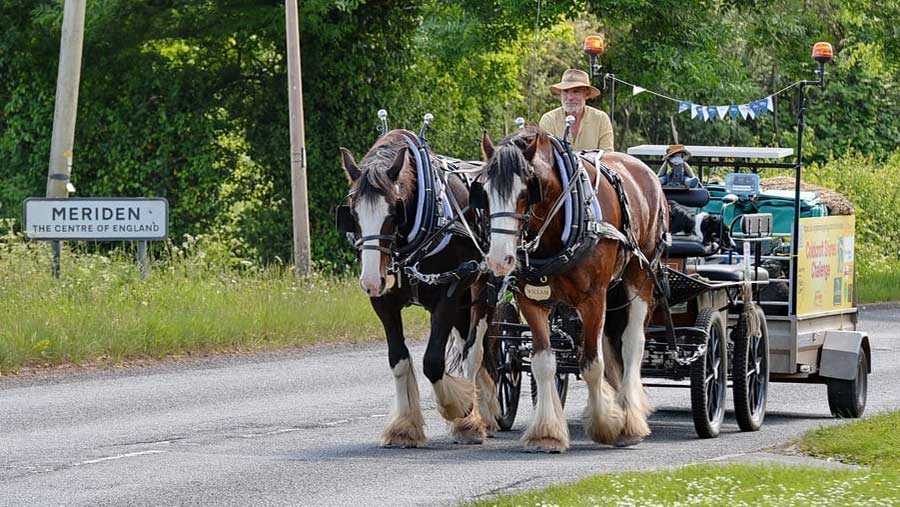 A Gloucestershire farmer is raising funds for police and firefighters’ charities by driving his pair of Shire horses 650 miles to the north of Scotland, in memory of his late, ex-policeman brother.

Jamie Alcock owns the 50-acre Coldcroft Farm at Huntley, to the west of Gloucester, where he keeps Gloucestershire cattle, Gloucestershire Old Spot pigs and Cotswold sheep, all for sale direct to the public and restaurants.

His other passion – and more profitable diversification – is Shire horses, which he uses to offer people full-day “experiences”, carriage rides and training in handling and working.

The charity drive – now ending its second week – is in honour of his brother, PC John Christopher Alcock, who passed away in 2017.

Christopher had previously been involved in a car crash, in 2003, while serving on Royal Protection duties with Grampian Police at Elgin, north Scotland, and never recovered consciousness.

The Coldcroft Shire Horse Challenge is raising funds for a charity, Police Care UK, that helped support Christopher through more than a decade of round-the-clock nursing care, though 25% of the funds raised will also go to The Fire Fighters Charity.

“I have always thought that I could never repay the charities that helped, but I know with what has happened with Covid in the last 12 months, charities have taken a massive hit and now I want to raise money to put it back in the pot,” said Jamie.

The farmer set off on Saturday 5 June with his two Shire horses – Millie and William – on an eight-week journey and has already raised more than £12,500 towards his £15,000 target.

“We are covering about 15-20 miles a day and collecting money as we go along,” he told Farmers Weekly as he prepared to cross the Humber bridge.

“We are doing the journey now as it fits in well with the farm work. Our sheep have been sheared and the hay is being done while I’m away. It’s a slightly quieter time in our farming year.”

As well as towing their own food in a cart behind the carriage, the horses are given supplementary feed and electrolytes, and are able to graze at night.

Jamie said he had wanted to farm since he was a child, but had only been able to buy his farm six years ago, following a 20-year spell as a drystone waller.

People can follow Jamie’s’ journey  and can make a donation online.