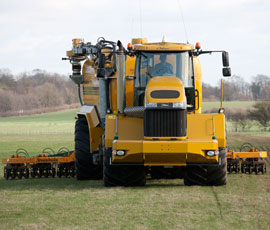 An investigation is under way after a farmer died in a slurry tank incident in Northern Ireland.

William McMillan, 43, fell into a slurry storage tank while working at a family farm in Dromore, in County Down, on Thursday (14 June). His funeral took place on Sunday (June 17).

The Health and Safety Executive Northern Ireland (HSENI) is now investigating the death of Mr McMillan, who was local to the area.

A statement said: “HSENI is unable to comment further upon this particular case, other than to offer our sympathy to the family concerned.”

In the statement, the HSENI urged farmers to take care when mixing and spreading slurry.

“The hazards associated with the handling of slurry fall into two main groups – those associated with gases released during agitation and the more obvious physical hazards related to equipment and buildings.”

Twelve people died while working on farms in Northern Ireland last year, and Mr McMillan is the fourth farm fatality in the country this year.

Details of the tragedy emerged as the latest figures from rural insurer NFU Mutual showed serious accidents are on the rise in the country.