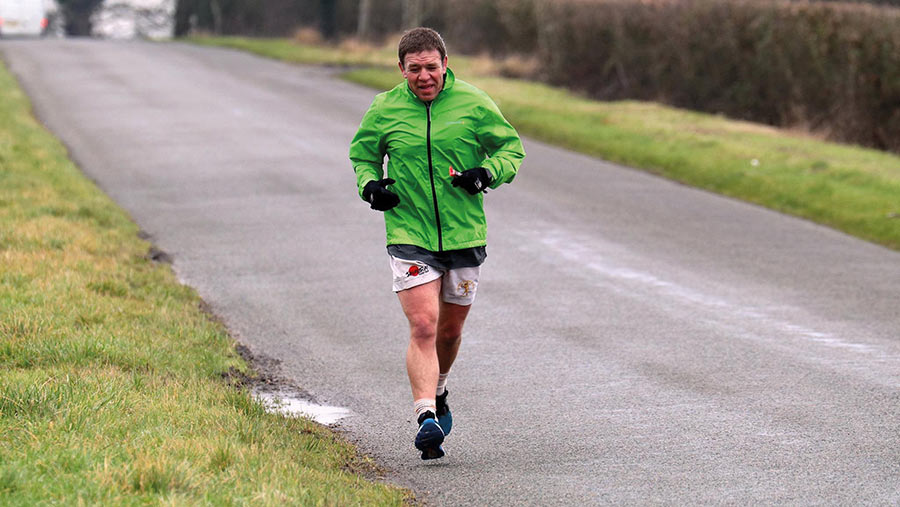 A Lincolnshire farmer who lost four stone in weight has run a marathon in less than four hours – helping to raise thousands of pounds for charity.

Charles Anyan only took up running nine months ago after his local swimming pool was forced to close during the first coronavirus lockdown.

He completed the marathon in 3hrs 53min 41sec on Saturday (23 January) around his home village of Springthorpe, Gainsborough.

Mr Anyan said he would usually have a snack after going swimming but changed his diet after taking up running.

He cut out unnecessary food, including Scotch eggs and Bakewell tarts, and his weight fell from almost 17 stone to less than 13 stone.

He said he was inspired to run the marathon after becoming involved in the Run 1000 campaign founded by Scottish farmer Sheena Horner.

The Run 1000 initiative has seen hundreds of farmers put on their trainers and raise money for farm charities by running during January.

“I went out on New Year’s Day as part of Run 1000 and covered 20 miles without stopping at a decent pace and it suddenly dawned on me that a sub-four-hour marathon was on.”

Family and friends cheered him on during the marathon attempt.

“What drove me on was the simple fact that nine months previously my first trainers had been delivered and it would be such a gesture to go from being a 17-stone man who vowed never to run anywhere to being a marathon runner. “

It drove me on all around the course.”

Ms Horner said she has been overwhelmed by support for the initiative.

“When I set this up, I just thought it would be a bit of fun and a few people would get involved,” she said.

“I just never realised the scale it would be – it has been phenomenal.”