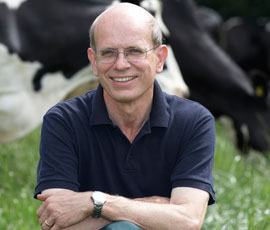 A farmer killed by his own bull may have spooked it by wearing a bobble hat, an inquest heard.

Father-of-two Ian Rook, 58, tried to calm his prize bull after it had become anxious after being moved from a field.

He approached the Aberdeen Angus bull, but was thrown up in the air, dragged along the ground and trampled on by the animal.

Portsmouth Coroner’s Court heard Mr Rook, who managed Manor Farm in Clanfield, Hampshire, was an experienced dairy and arable farmer and had been involved with cattle all his life.

The inquest heard that he would often approach bulls and scratch them behind the ears.

But on this occasion, the Daily Mail reports the bull did not recognise him as he was wearing heavy clothing and a red fleece hat.

Mr Rook suffered severe chest injuries from the attack and died later in the Queen Alexandria Hospital in Portsmouth,

His wife Amanda told the court: “He had a lot of heavy clothing on because it was bitterly cold and he had a red fleece hat on which changed the shape of his head. He always wore a cap or was bare-headed.

“He also didn’t have his car which the bull would always recognise.

“I can only imagine he was about to show the people he had just spoken to he could calm the situation down and things were alright.

“He loved animals and thought he could have curtailed him. In my own mind I feel the bull didn’t recognise Ian.”

The Health and Safety Executive found that Mr Rook had followed their guidance in keeping animals and had taken sensible taken sensible safety measures on his farm to minimise the risks.

Mr Rook was chairman of the Hampshire branch of the NFU in the early 1990s.

An NFU spokesman said: “Ian Rook was very well known throughout the Hampshire farming community – he will be sorely missed.

“Ian will be remembered for his warm-hearted personality – he was well liked throughout the local community.”