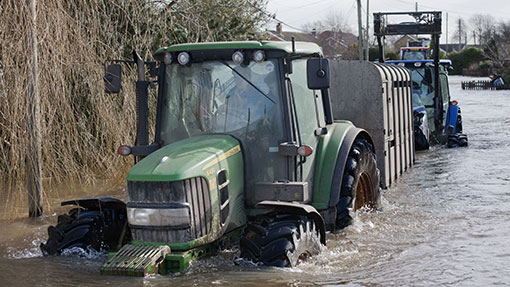 Farmers from across the country are pulling together with agricultural buyers and suppliers to help get feed and bedding to flood-hit farms in Somerset.

A group of farmers near Peterborough, Cambridgeshire, has gathered an assortment of more than 400 bales of hay and straw which are in the process of being transported down to the West Country by Tesco.

Jenny Martin of Walcote Lodge Farms, Fotheringhay, said she and her husband Bill had watched a news report on the floods on Friday evening (7 Feb) and been struck by a need to help out.

“We saw [farmer] James Winslade on the news and wondered what we could do. We realised we had some spare bales and started asking neighbouring farms and within a couple of hours we’d got promises of about 400.

“A friend of ours then saw a tweet from Tesco offering to help with transport so we contacted them. They have just told us we have four lorries at our disposal to pick up from local farms.”

See more: Read a full round-up of news on the floods

Ed Ford, vice-chairman of Essex Young Farmers, said Tesco had also offered to help transport five or six loads of hay and straw being gathered from farms in his locality.

“We attended the Young Farmers Conference this weekend and when the county representatives from Somerset stood up and started to speak then the gravity of the situation hit home.

“When we got back we started texting local farmers and it has spread like wildfire. Something has to be done and this is an ideal opportunity to rally around.” 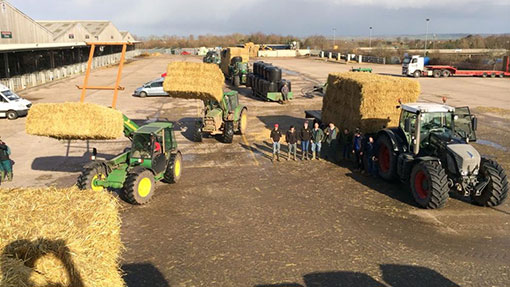 North Somerset YFC member Lindsey Carnell said her club had spent the weekend gathering straw, hay and silage donations which they had then transported to Sedgemoor market, which is acting as a collection point, with the help of local firms Alvis Contracting and Chris Burr Contracting.

“We’ve have had a very positive reaction and we are glad that we could do our bit. It’s nice to see farmers helping farmers.”

In Herefordshire, Ally Hunter Blair, who himself has close to 60ha under water, said he had dispatched two loads of bales down to Sedgemoor with the transport supplied by Frontier.

“We’ve have had a very positive reaction and we are glad that we could do our bit. It’s nice to see farmers helping farmers.”
Lindsey Carnell, North Somerset YFC member

Another load of straw has also been transported by Premier Foods from James Howe Farming, near Alford, Lincolnshire.

In a mammoth undertaking, two tractors and trailers laden with livestock fodder and bedding for flood-hit farmers will set off on a 225-mile journey from Yorkshire to Bridgwater on Thursday morning (13 February).

Wakefield agricultural contractor Philip Rowbottom and his neighbour Andrew Nicholson, will begin the 10-hour journey in the early hours

The pair will drive two tractor and trailer rigs – each laden with 15t of silage, haylage, hay and straw.

The cost of the diesel is being met by local farmers and the Wakefield NFU branch and all the donated fodder and bedding has been sourced by members of the Barugh and District Ploughing Association.

Mr Rowbottom said: “We deliberately wanted to take the donations by tractor and trailer to help highlight the plight of farmers so desperately in need on the Somerset Levels.

“The response from the local farming community has been amazing – in fact, it only took a day to get more than we needed for a single load.”

He added: “The fact that Andrew has offered to accompany me with a second load is superb as it means we will be able to take everything donated so far.

“Hopefully our journey will help highlight the solidarity we all feel with those farmers in Somerset who are facing such tough times.”

Tesco announced on Saturday that it would try to make it fleet available to farmers affected by the floods. Farmers in need of support can call on 0800 072 6684.