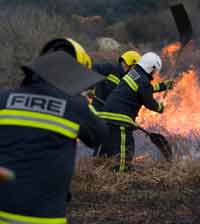 Farmers have helped fire crews tackle a massive blaze that swept across 75ha (200acres) of gorse near Colaton Raleigh in East Devon.

Some 25 fire appliances were called to the blaze which started on Woodbury Common yesterday afternoon (20 April). They were assisted by staff from Farmers Weekly‘s Management Matters farm, Clinton Devon Estates, the owners of the land, who cut fire breaks through the vegetation.

The fire spread quickly because the recent dry weather meant the gorse was “tinder dry” and it was being fanned by a gusting wind. It took four hours to bring the flames under control using water jets, hoses and beaters.

Smoke was reported as being visible from several miles away and a police helicopter was also called to the scene.

One of the estate’s tractors was lost during the fire after electrical wiring was burnt out and the tractor had to be abandoned.

“Without the incredible team effort of all the people involved yesterday, the consequences could have been far, far worse,” estates director John Varley said.