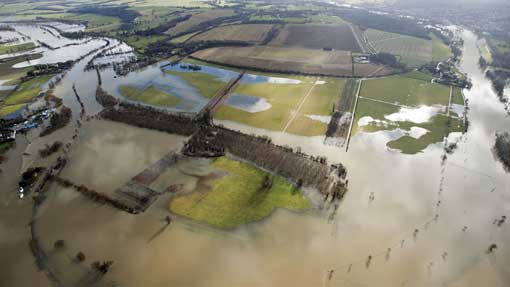 Frustrated farmers in the Thames Valley say unless river maintenance is made a priority they will face a repeat of the winter floods.

The Thames Valley was one of the worst affected regions in the winter storms. Severe flooding left many thousands of hectares of crops under water for weeks and farmers had to evacuate livestock from flooded land.

He decided against applying for government flood grants, worth up to £35,000 , because they required three quotes and were “impossible to access”.

Mr Beddows, a Farmers Weekly Arable Farmer Focus writer, said the floodwaters may have receded, but the problems have not gone away. A slimy layer of residue remains in grassland fields and cattle cannot be let out to graze.

Last weekend (21 April) an inch of rain fell on the farm and bogs started to reappear on sodden fields – a stark reminder that future floods are likely.

“The Environment Agency hasn’t been in touch. There has been little input, if any, in this area,” said Mr Beddows. “They’re doing work in Somerset where there is a bigger problem. But something needs to be done on the Thames.

“It isn’t all about dredging; there are sand isles that need addressing with vegetation on them, banks that have collapsed, fallen trees and branches hanging in the river.

“We can put our house in order by clearing the ditches, but the river maintenance needs to be sorted out. Basic maintenance hasn’t been carried out for the last 10 years. That will have an impact on how likely it is to flood again.”

Fellow south Oxfordshire grower William Emmett, who farms 1,200ha of mixed cropping in partnership with his brother John, said Environment Agency officials told him dredging was not likely to prevent flooding in the Thames region.

“They (the Environment Agency) have accepted dredging is part of the solution on the Somerset Levels, but maintain it won’t work here,” he said.

“But common sense tells you that if you take a bucket full of mud out of a hole, it will store more water.

“Allowing farmers to carry out their own dredging work can only be part of the solution. It’s all too easy for them now. It’s stopped raining, the sun’s shining and they will all forget about this.”

Further downstream, Berkshire grower Colin Rayner, a director at J Rayner and Sons, said he applied for “every grant possible”, but so far hasn’t received a penny.

Berkyn Manor Farm, in Horton, lost about 10% of its crops in the winter floods. And the Rayners sold a herd of cattle because they could not see a future keeping them while the rivers constantly flood.

Mr Rayner, a Conservative supporter, said he felt “very disappointed” by the government’s response to the flood relief effort.

“ The prime minister said no expense would be spared in the recovery , but he has gone on holiday and we have still got 50 people out of their homes,” said Mr Rayner.

“I’ve been trying to get local MPs to get a summit together to discuss what we are going to do to prevent future flooding, but no one is interested.”

In the immediate aftermath of the flooding, the Army cleared ditches in his area. But Mr Rayner said no river maintenance has been done since.

“The Environment Agency and planning officials have just disappeared,” he added.

“The government is saying river dredging doesn’t work here. But the Dutch spend €10m a year on dredging and not one house was flooded during the same winter we had.”

Mr Rayner said it would cost an estimated £350-£500m to build a new flood defence barrier for the Thames, whereas the winter floods cost businesses, insurers, utilities and individuals up to £10bn in the region.

“We just want the River Thames dredged and the weirs to be rebuilt,” he added.

An Environment Agency spokesman said: “In this financial year we will spend £45m on clearing rivers; however de-silting and dredging are not the most cost-effective solutions to managing flood risk as often rivers rapidly silt up. We therefore focus our efforts on where this is proven to be most effective.

“In Oxfordshire, we have maintenance work planned this year on the River Ray, River Bure, Marlake Ditch, Wendlebury brook, Pingle stream, Langford brook and the Murcott Dyke. Maintenance work is planned in line with government policy to provide the greatest flood risk benefit.

“We want to make it as easy as possible for farmers to undertake appropriate maintenance work on rural watercourses themselves, whilst still ensuring that wildlife and the environment are properly protected.

“We are supporting DEFRA’s watercourse maintenance pilots programme and have also met with the Otmoor farmers on several occasions to advise them how they can best manage flood risk to their farmland.”