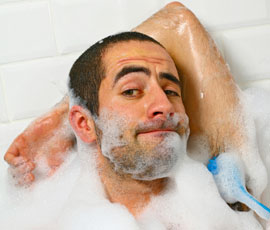 Dry weather has prompted DEFRA to launch a new task force in a bid to tackle the drought.

The new group, code-named “Don’t be a Drip”, is charged with coming up with “out of the box” recommendations aimed at farmers.

As well as addressing long-term solutions such as water storage and movement, the task force will consider short-term agronomic and domestic solutions.

“So-called grey water (ie that from baths) could be collected from local residents and used for irrigation purposes,” said the leader of the group, Dr Martin Tapp.

He acknowledged the huge problems many farmers are facing and praised them for the steps they were already taking regarding water conservation such as their exemplary approach to car washing. “Basically, they never do it,” he said.

He called for farmers to “get creative” – especially those with irrigation facilities.

“Could you, for example, instigate communal staff showers under the irrigation boom? Doing this at night when less irrigated water would be lost to evaporation would add to the conservation effect and perhaps make staff less inhibited about participating.”

Toilet flushing is also an area to consider. “Don’t flush if you don’t have to – or only flush every fifth use,” urged Dr Tapp.

“And when it comes to spending a penny outside, don’t just urinate in the hedge. Target dry patches of soil and drought-stressed crops.”

Baths are one of the biggest uses of water so the group is planning to issue a guidance document about this. Farmers Weekly has learnt one of its suggestions is that farmers share baths.

“It would obviously be more appropriate for relatives or friends, but I could see farmers who don’t know each other well embracing this initiative,” said Mr Tapp. “Admittedly, they’d probably be from same sector. I couldn’t, for example, see an arable farmer bathing with a cattleman, or a sugar beet producer splashing around with a shepherd.”

The guidance notes will give advice on dealing with areas of potential conflict such as who gets the tap end, reaching agreement on the water temperature and “avoiding awkward moments when entering or exiting the bath”.

Don’t be a Drip’s inaugural meeting took place earlier today, April 1. “We will be decisive and take action,” vowed Mr Tapp. “The last thing we want to be is ‘wet’. Well, we want it to be wet – but you know what I mean.”

Mr Tapp was also involved in a groundbreaking scheme last year, also announced on April 1, to get farmers to connect more with the urban public by owning fewer traditional dog breeds like labradors and spaniels and replacing them with more “street” breeds such as poodles and boxers.