Swiss-born Claire has just started her fourth and final year of a BSc honours degree in agriculture at the Ayr campus of SRUC in Scotland, while also helping to run a beef and sheep hill farm on the Isle of Mull with her partner. 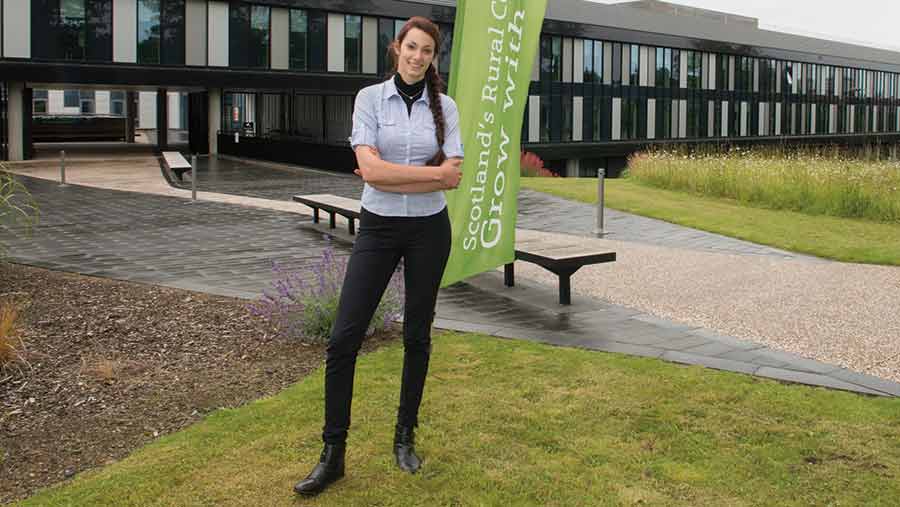 She came top of her year in her third-year exams, has won awards for her business and farming acumen and, despite English not being her first language, is in demand both locally and nationally as an adviser on topics ranging from dog attacks on sheep to Scottish land reform and women in agriculture.

Six years ago Claire quit her job as a paralegal in Zurich to embark on an 18-month journey of discovery, working her way through a series of temporary placements on farms across Scotland and north Wales.

During her travels she applied for the course at SRUC and also met her partner, a tenant hill farmer on Mull.

Claire is now a vital part of the operation, taking full responsibility for the record-keeping and accountancy side of the business.

She is currently working on expansion plans, including the future acquisition of land to take wintering and grazing stock as well as store animals for fattening prior to slaughter.

Last year Claire won the prestigious AgriScot Business Skills Award, given to the young person judged to have the best business skills and greatest awareness of current agribusiness issues.

One of the judges, former NFU Scotland president John Kinnaird, was so impressed with Claire that he asked her to join a group looking at how the Land Reform Act in Scotland can be made to deliver a sustainable future for those who work in the rural community.

She has also been asked to join a study group organised by the James Hutton Institute to look at the role and status of women in agriculture.

Claire is respected by her fellow students, who elected her as their representative on the Student Liaison Committee.

She is also very active in her local farming community on Mull.

She has contributed to the Mull community Facebook page, alerting people to the dangers of allowing dogs off the lead near sheep, and has been consulted by local farmers on how to deal with sheep worrying.

She has also created a Facebook page specifically for the Mull farming community.

Earlier this year Claire wrote a proposal to create a supply co-operative for the island. It won first prize in the Next Generation competition organised by the Scottish Agricultural Organisation Society.

Claire has been trialling the use of hand-held stock recorders, not typically used on hill farms. She wrote a technical note on the subject that is now used by the company supplying the technology and SRUC.

After graduating, Claire wants to work as an agricultural consultant with an organisation such as SAC Consulting, while continuing to work part-time on the farm on Mull.

She also wants to take up a Nuffield scholarship, focusing on the relationship between subsidy systems and farm efficiency across the globe and developing plans on how Scotland could better target farming grants.

“The three finalists represent the very best of the new generation of smart, motivated young people taking their first steps in farming. Their passion, determination and sheer talent bodes well for the future of the industry.”